The real challenge for the CLS Summer School is that, with each succeeding year, the success of previous years just sets the bar even higher but once again it would appear that Linda has more than risen to this challenge.

The first of four masterly crafted excursions was a full day trip around the Konavle region in the extreme south of Dalmatia.  Firstly we visited the shrine of Mitrej in Močića hidden well off the beaten track. At Čilipi, Museum curator and ethnologist, Marina Desin, took us under her wing and treated us to a far more detailed and at times emotional tour of the museum than visitors would normally expect and gave us a powerful insight into how the museum coped during the period of the Homeland War, when this area came under siege. Then in the village of Mijača, Miho Banac treated us to a glimpse into his home and work. Originally a seafarer, he is now an accomplished stone mason and calls on all his experience and talent to craft a wonderful range of creations in stone. 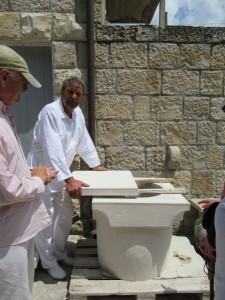 After an extended and convivial lunch, Maro, our long-suffering guide for the day, hurried us along for a quick visit to the nearby mill complex before we moved on to a typical Konavlian homestead, where Ivo and his extended family treated us to the most delicious tea, cakes and cherries while telling us the story of his family’s life going back over generations. And the finale to our richly diverse day was a visit to the Grey Falcon viewing point perched high above Cavtat, where we watched the sun set gloriously over Lokrum, the Elifiti Islands and beyond. 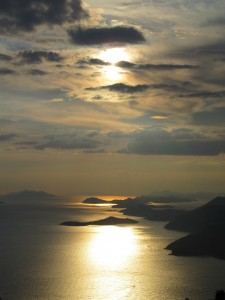 Monday saw the start of our lessons, although how much sense Linda was likely to get out of us was debatable given that our classroom was an idyllically located gazebo on the lower terrace of our school house for the week with views over the bay of Cavtat. Lounging in wicker chairs, sipping chilled water and tucking into strudel was not necessarily compatible with struggling with the instrumental, collective nouns and all the other joys of this wonderful but sometimes infuriating language!  In the evening we were invited to drinks and canapés at the house belonging Tony, one of our fellow students, which was situated at the end of the peninsula with breath-taking views of the bay and surrounding area and from where we had front row seats for another glorious sunset as the finale to the proceedings.

Tuesday’s highlight was a walking tour of our home for the week, the old town of Cavtat. Pre-dating even Dubrovnik, Cavtat has a small town charm all of its own. It has also, impressively for its size, been the home at various points in its history to several notable Croatians. Most famously, it was the birthplace of Vlaho Bukovac, the renowned Croatian artist, whose birthplace is now a museum. Maro was once again our guide for the tour and imparted to us his extensive knowledge of the history of the Bukovac family, while we sat in the evening cool of the garden. We later visited the Church of Our Lady of the Snows on the waterfront and then climbed to the top of the hill to visit the mausoleum of the Račić family. By now our heads were brimming not only with genitives and datives but also the inside story of several notable former Cavtat residents. 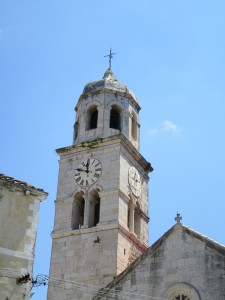 After class on Wednesday, we set off by boat for Dubrovnik. Nives, our guide for the evening, took us round all sorts of nooks and crannies, which even the seasoned Dubrovnik lovers amongst us had previously overlooked, and explained many aspects of the history of the city. But the real treat of the evening was paying a visit to the house belonging to Maro, our guide from earlier in the week. Set in a most glorious garden, full of fruit trees, date palms and all manner of plants, the house was built just before the devastating earthquake of 1667 and, although damaged, it survived the ravages of that event. Here Maro treated us to an array of homemade liqueurs, including rozalin, which is made from a certain kind of rose petals, pure grape rakija, walnut liqueur and another made from a mixture of cherries, apricots and peaches.     Dear Maro had also prepared for us mouth-watering Panama kakao bread, as well as other breads made with walnuts and cherries as well as bite-sized pieces of quince and other delicious nibbles. Maro’s knowledge of and enthusiasm for all things dear to his heart is infectious and this magical visit to such a normally inaccessible place will live long in the memory of everyone who was lucky enough to be part of our group.

On Thursday, under the guidance of Dino and with Pero behind the wheel of his trusty minibus, our first stop on our trip to Montenegro was the island of Our Lady of the Rocks, which was built by local seafarers as a consequence of their depositing stones in the sea over a period of 250 years. In Kotor we were introduced to our local guide, Miro, who conducted us swiftly round the beautiful walled town. His brief was to give us a taste of what life had been like in Kotor over the centuries and this he did with gusto and panache. He really brought the town to life for us.

In the old capital of Cetinje we visited the sumptuous Court of King Nicholas, which since 1926 has been a museum to the period of his rule. Thereafter we drove down to the coast to find that the erstwhile seaside village of Budva had mushroomed in size over the past couple of decades and was now doing a good impression of many a Spanish resort. Sveti Stefan, which variously over the years had been a fishing village, hotel and derelict, has of late been developed into a top end resort hotel enclave, forbidding entrance to all but its residents.   In spite of these relatively unwelcome developments, the day as a whole was wonderful, the Bay of Kotor was stunningly beautiful, Kotor itself a gem and the hinterland a wild and glorious landscape, where a different vista opened up at every turn.

When school was out on the final day, we were all invited to join student Donna and her husband Jonathan for drinks on the terrace of their Cavtat home. Their gorgeous garden clings to the side of the hill and has wonderful views over the bay and the town. Afterwards, most of us enjoyed a final meal together and both Maro and Mihaela, our local organiser, were part of the party. Mihaela had been working furiously on our behalf throughout the week to keep all the wheels of our ambitious programme turnings smoothly.   And then it was time to say goodbye. As ever, we are so grateful to Linda for making the trip a reality and opening the door for us once again to allow us another glimpse of the rich diversity of this beautiful country and its language and culture. 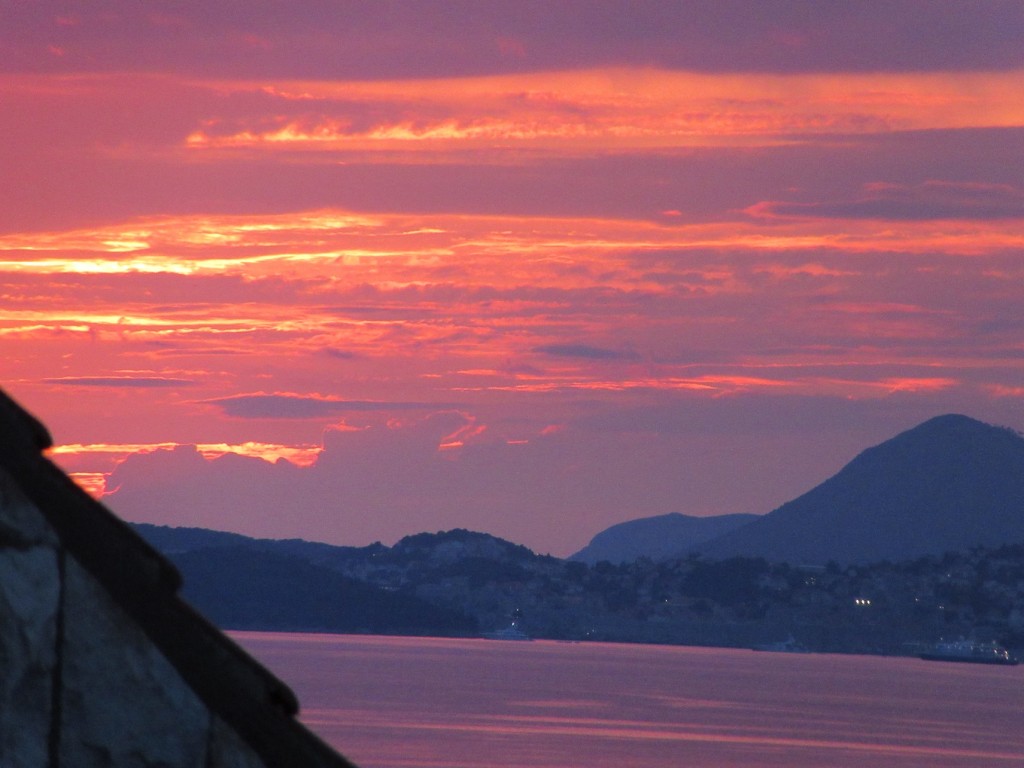