During the Croatian Language School’s week in Cavtat in June 2015, we enjoyed a day visit to the Gulf of Kotor in Montenegro. Two massive cruise ships were in the port of Kotor and as we jostled with hundreds of tourists in the town, I wondered how many of them realised the strategic significance of this area over the centuries. For example, two hundred years ago Napoleon’s dreams of conquest in the East – a grand march through the Ottoman Empire to the Levant, Egypt and even India itself – were kept alive by his possession of the two fortress cities of Ragusa (now Dubrovnik) and the Bocca di Cattaro (Gulf of Kotor) that commanded the way eastward. In particular, Emperor Napoleon’s commercial blockade of continental Europe, designed to halt British worldwide trade, was leaking badly, mostly across the Adriatic and through these two cities. 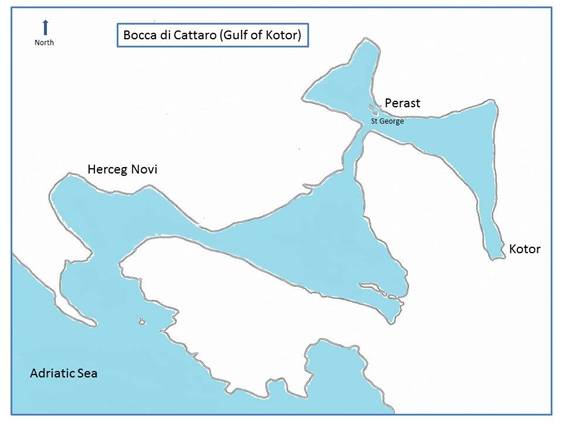 In autumn 1813, Castello Nuovo (now Herceg Novi, a small fortress town guarding the entrance to the Gulf), San Giorgio, on an island in the Gulf, and Cattaro (Kotor) itself at the head of the Gulf, were all garrisoned by the French. Mostly these units consisted of French officers, artillerymen and engineers, while their soldiers consisted largely of Croatian and Italian mercenaries. Castello Nuovo possessed over twenty guns, San Giorgio sixteen, while Cattaro had sixty-five guns mounted on its ramparts and in the fort of San Giovanni built on a peak 700 feet above the town. The town, with its thick walls which connected with those of the fort above, lay at the end of the fjord surrounded by steep mountains. In October 1813, Captain William Hoste RN, the victor of the spectacular frigate Battle of Vis two years earlier, in a new frigate HMS Bacchante, sailed into the Gulf with a smaller vessel, the sloop HMS Saracen. The garrison at Castello Nuovo surrendered easily to him while the Saracen had little difficulty taking San Giorgio. Hoste soon appreciated that Cattaro would pose more of a problem. Ships’ guns, at sea level, would have little effect on its walls, thirty feet thick, while gunfire from the fort above the town would pour down cannon balls on any attackers. Hoste decided on 13th December 1813 that he would lay siege to Cattaro by landing his ship’s guns on the opposite side of the fjord and establish his artillery batteries on the summits of the mountains opposite the town. It required superhuman efforts from Hoste’s ship’s company often in pouring, steady rain and frozen nights. It took them only six days to get the first gun to the summit, but this was not the only site. More guns were brought ashore from the Bacchante, some to be hauled up the mountains behind the city. The defenders did not appear to be too worried by the activity of the British sailors; the French commander, General Gauthier, said he would give Hoste six months to get one gun up the mountain.

By Christmas Eve, batteries had been raised on all sides of Cattaro. Powder, cannon balls, carronades, rockets, mortars, rigging equipment and food all had to be landed and hauled up the steep slopes while at night sailors had to sleep under old sails rigged as basic shelter. Hoste gave the order to open fire on Cattaro at dawn on Christmas Day. The bombardment continued each day and on December 28th a British shot struck one of the powder magazines on the ramparts blowing it up with an explosion that silenced the French guns. On the 5th January 1814 General Gauthier surrendered; the terms of surrender involved the garrison becoming prisoners of war, but Captain Hoste concentrated on recovering the batteries and equipment, and handing the keys of Cattaro to a Commission of local people. He left the Gulf in HMS Bacchante on the 18th January 1814 having achieved one of the most remarkable captures of a walled city in maritime history.

Three months later, on 13th April 1814, Napoleon abdicated as French Emperor and on 3rd May arrived in Elba on board the Royal Navy frigate HMS Undaunted.