A Very Special Restaurant on Vis

Blog number four from Julia Molden, our reporter on Vis island, highlights why our Croatian Culture and Language Courses are so very special. Where else would you be fed four delicious courses in a remote island bay by a renowned local poet?!

In our lesson this morning we started to prepare for our visit to Senko Karuza later in the day by reading a couple of his short stories.  The first one was about the importance of a family photo and the second one was entitled “No, I Do Not Want To Wake Up” because the world is an unpleasant place and he would rather stay with his dreams.

After lessons had finished for both groups, we all set off down unmade tracks in a large taxi finally arriving at Molo Trovno, a little cove where Senko has his restaurant.  We were greeted warmly by him and plied with all sorts of spirits as we settled down on the edge of the sea.  Some of us grabbed a quick swim before the feast began and then four courses of beautiful food followed, including an aromatic fish soup and all manner of fish which had been freshly caught and prepared for us.  Wine and conversation flowed and the afternoon drifted into evening.

The reason for going to Senko’s restaurant was to hear some of his works being recited by him, and also one or two of our party, including one of the pieces we had studied in the morning.  This helped to create a joyous tone as the evening progressed, which led on to more singing of Croatian klapa songs, complete with song sheets for all of us this time.  As night began to fall but before it became too dark for the taxi to come back along the track to find us, the party split up and dispersed in great good humour and by the time we got back home it really was dark and we were all tired out.  We were grateful to our skilled taxi driver for safely negotiating the track with twists and turns and in places sheer drops with no crash barriers, which gave us wonderful final glimpses of the bay where we had spent an enchanting afternoon. 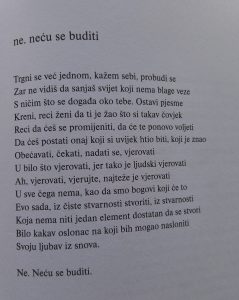