Croatian Language SchoolnewsletterASHBO is ready to Share the Love!

Croatian television channel, HRT, brought Ashley and Bojan together as ASHBO on their popular TV series, Singing With The Stars, [Zvijezde Pjevaju] and, almost two years later, they are taking to the stage again at this year’s Dora competition, to select the Croatian entry for the Eurovision Song Contest, to be held in Opatija on February 13th.

This will be Ashley’s first time competing in Dora though for Bojan it’s the third time. Ashley is the songwriter and the lyrics were inspired by Ashley’s travels around the world and the idea that we all have more in common than that which separates us, no matter our race, religion, status or culture.  Ashley comments:  “the last year has been tough on everyone and we all need more love, and, most importantly, to share the love.”

The music was composed by Ivan Škunca who also wrote and composed Bojan and Ashley’s first duet, Zadnja Stanica. Škunca also translated the lyrics of “Share the Love” into Croatian.

ASHBO has been preparing the performance for months and told us it will be a spectacle, something that has never been seen before on Dora. Ashley will wear Larie by Marina Matić, a gown that will surely also make a statement. Bojan explains further: “We always go full out on everything we do together, so you can expect a really good show.”  With this song, Ashley and Bojan want to share the positive message of togetherness, tolerance and love. They plan to release the official music video and the song in Croatia on Valentine’s Day, February 14th, the day of love. They hope that people will be inspired to #ShareTheLove around the world.

Bojan Jambrošić started his singing career in 2009. Since then he has recorded three albums, Bolji od ljubavi (2009), Zapisano u zvijezdama (2013) and his most recent, “Kajkavski biseri”, was performed with Tamburaški orkestar and received a Porin award. He also has a very successful acting career and has starred in the main role in eight musicals and one operetta. He was nominated for “Nagrada Hrvatskog glumišta” for best male role in a musical. 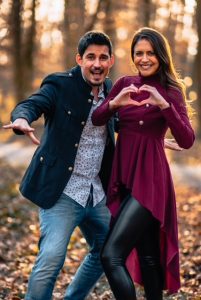 Ashley Colburn is a Croatian-American travel journalist, born and raised in California, who decided to move to Croatia five years ago, basing herself in Istria. Her first Emmy was for “WOW Croatia” which was viewed by millions around the globe. Ashley continues to promote every corner of Croatia and believes it to be the most beautiful country. After Zvijezde Pjevaju, ASHBO recorded their first duet together, “Zadnja Stanica”, and filmed a video all around Croatia. In 2020, Ashley released Croatia’s first English country song, called “Feels Like Home”, which was composed by her mum and produced in Nashville, the home of country music. With traveling being tough in 2020, Ashley instead grew to love song writing, which led to her writing “Share the Love”.

This link will take you to an interview we did with Ashley when she was in Singing With The Stars: Ashley Colburn Sings With The Croatian Stars