We’re delighted that Andrea Pisac Freskura agreed to talk to us this month on a range of Croatia related subjects, including tips for learning the language and some of her favourite foods. Andrea is a writer, anthropologist and expert on Croatia, not to mention an accomplished cook, and has also traveled widely and studied in London. That gives her an informed international, as well as a local, perspective on Croatian culture and trends, and helps shine a brighter light on those hidden gems and the sheer variety of all that is good and special about Croatia. Many thanks to Andrea for her time and insight and we are looking forward to seeing the print version of her new book  Croatian Desserts Cookbook very soon. 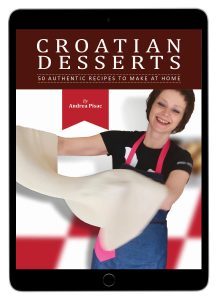 1.You seem to have led an extremely varied and interesting life – can you give us some of the highlights?

When I begin listing all the things I’ve done in my life, they will seem varied. But in reality, they all have a common streak. And that is storytelling. So, I studied literature (Croatian and English), I am a published fiction writer, I got charmed by the British academia so I got both MA and PhD degree from the University of London. During my MA, I had anthropology as one of the courses and I totally fell for it head over heels. This is why I decided to carry on with the PhD. Anthropology and writing are like siblings. My academic training taught me how to be a better writer and my creativity made me a quirky (but much better) academic.

I love campaigning work so I am always part of some kind of charity, NGO or non-profit organization. I worked at the English PEN where I promoted literature in translation. In Croatia, I was vice-president of the Croatian Writers Society. I take literature and wider culture as a basis for any kind of tourist promotion of Croatia.

Currently, my work mostly revolves around promoting Croatian culture in the widest sense – from high culture to folklore (traditional culture). And I use various media: my blog, video, cooking classes, live workshops. The print version of my Croatian Desserts Cookbook is out this summer too.

2. You lived in London for a while – what made you go back to Zagreb, does it feel like home and what did you miss most about it when you were in London?

Coming back to Croatia was a lucky constellation. At first it wasn’t a conscious decision. I was working on an academic project that allowed me to spend much more time in Croatia than before. I began to see the benefits of the slower, more organic life, which revolves around the community. I had spent so much time advancing my career and investing only in me as an individual, so being back in Croatia opened my eyes to the value of togetherness and the collective. 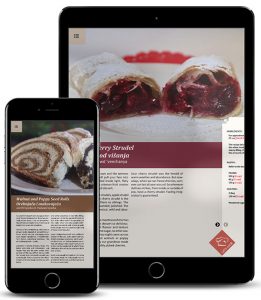 Also, I am a healthy life aficionado and food in Croatia tastes and IS so much better than in London 🙂

On top of that, I met my Croatian husband in that between-time and he also taught me the importance of being grounded. Having roots is the one and only thing I missed in London. I love London loads, but the transient nature of the city – something that attracted me at first – is the very thing that made me want to go back to Croatia.

3. For tourists to Croatia, that perhaps only know the coast and islands, what do you think might most attract them to visit Zagreb?

Culture, the year-round character of the city, a sense that they are not part of the show being put up for them – it’s very easy to experience the living city. Most of all, but this only happens if they stay a bit longer, Zagreb’s quirkiness and a nonchalant flair. For example, I adore the slight neglect that flows through much of the locals’ behaviour. Parks that are just slightly overgrown, coffees that are just slightly extended, working hours that are just slightly shortened… it’s totally charming.

4. You’ve published a cookbook on Croatian desserts – what would you say distinguishes Croatian cuisine from other countries most and what are your five favourite Croatian foods? 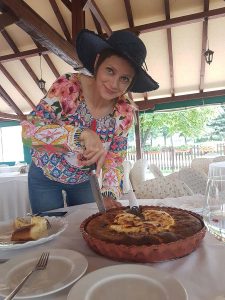 The most distinguishing thing about the Croatian cuisine is that it’s multicultural and that few people realize that. I am not talking about ethnic food as it’s known in the UK or the US. Multiculturalism in Croatia was fused together centuries ago, but the heritage from so many different influences has become our tradition. Turkish, French, Italian, Venetian, Hungarian, Austrian, Bohemian… these are the historical influences that have shaped our daily food.

My favourite dishes, taking into account that I am a vegetarian who sometimes eats fish, are: štrukli, sauerkraut with gnocchi, škampi na buzaru, black risotto, ajvar.

By the way, I have the štrukli recipe in my Cookbook. This is quite an ingenious dish because it can be eaten as a main, savoury, dish, or as a dessert.

5. Do you think tourists to Dalmatia and Istria get to see the best of Croatian cuisine and how can they go about discovering some of the lesser known local favourites?

I adore Dalmatian and Istrian food. But this is just one side of the story. Continental Croatia bursts with flavours: earthy, rich, rounded, full… My favourite continental region is Međimurje where they eat a lot of buckwheat, mushrooms, chestnuts, and they season everything with their outstanding pumpkinseed oil – which they call ‘the black gold’. Slavonia and Baranja are amazing regions too. Freshwater fish from the rivers Drava and Danube is fantastic, especially in the traditional fiš paprikaš (spicy fish stew). Most things there are spiced with paprika (Hungarian influence), including the famed kulen sausage.

6. What top five tips would you give to one of our Croatian Language School students just starting out to learn the Croatian language properly?

* Start babbling as soon as possible, way before you feel confident about the grammar.

* You need about 2000 words to be able to converse, that is much less that you thought.

* Learn the fillers, exclamations and the seemingly unimportant words – they will give you confidence in a conversation.

* Learn the ‘living’ pronunciation, not the correct one, which may include swallowing parts of the word

* Pay attention to the melody and intonation, not only the meaning. 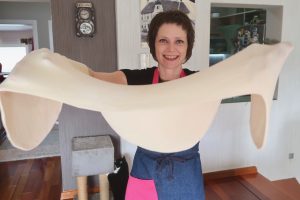 7. Do you see any emerging trends in the language and culture now Croatia is well integrated into the EU after its entry in 2013?

Croatia is, unfortunately, among the countries which spend the least amount of money on culture. Culture, on the other hand, will never die. I am an anthropologist and if anthropology has taught us anything it is this: tribes, communities, nations, all survive only through culture. It is easier with better state funding, but it happens anyway. The emerging trend? Tourism helps local culture. Sometimes it takes the outside perspective for the insiders to appreciate their own culture.

8. How can people find out more about you and the many projects you are involved with?

My Facebook group Croatian Insider, which is a super engaged community of true Croatia fans. This is the place where I actually teach members about Croatia on a daily basis.