After a rest day on Tuesday, Julia Molden reports on day five of the Croatian Language School Language and Culture trip, when the Lovran Gang go back to playschool! 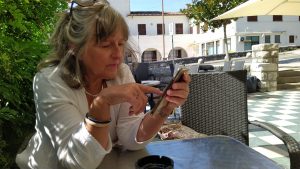 Tuesday  was a day of relative rest with a mere three more hours of exploring the complexities of the Croatian language.  This was followed by an afternoon free to do whatever we wanted to do, which, for some, was a walk along the scenic seaside walkway named the Lungomare, for others, meeting friends we had made in the area during previous summer schools, and for yet others, a dip in the beckoning Adriatic.  But, come Wednesday, we were back up and running again at an even more frenetic pace than on our earlier excursions.

Today we were going to explore the  mountainous region called Gorski Kotor and off we set at 9.00am for a rendezvous, with our guide Nada, in Rijeka city centre.  Before we even reached our appointed meeting place, we found Nada waving us down and telling us on no account to go any further as the road was full of traffic and at a standstill.  So she jumped in and on we went and finally caught up with the car with the rest of our group in it.  We compared notes about the way to go to our first stop which was a woollen mill making traditional woollens in Ravna Gora.  Whatever I had envisaged, it wasn’t that we would be having a go at making them ourselves.  After driving along a stretch of road which was actually being dug up and repaired around us (this should be tried in England rather than inflicting on us the epidemic of road closures which we are currently enduring!) we pitched up outside what looked like a perfectly normal house in a row of similar houses to be greeted by two jolly ladies, one of whom bore a striking resemblance to Julie Walters.

We were ushered into their garden and plied with home-made rakija and fruit juice before being invited to gather round a table and given pieces of pure, raw, white wool.  Julie (actually Katica) and her friend (Nada) then proceeded to show us how to tear the wool into strips, lay them on top of each other, some horizontal and some vertical, and then add bits of variously coloured wool to make a picture or pattern of our choice.  They then proceeded to pour warm (rather than cold) water over our efforts and then instructed us to rub soap all over them.  This all went on for quite a while until we were told to fold and roll up our creations and keep throwing them down on the table.  It was like nothing more than grown-up playschool and we were all having such fun throwing them about and getting rid of our aggressions at the same time.  Eventually our masterpieces were unravelled and we surveyed them with pride. 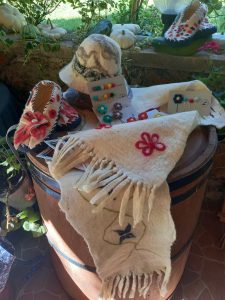 We also had the opportunity to buy products made in the same way – but rather more professionally – by Katica and Nada and other women in their ‘Goranske Vunarice’ Association and came away clutching a variety of cushions, hats, slippers and brooches, all totally unique as well as useful.  We all bade enthusiastic farewells after a most enlightening and entertaining morning.

If you would like to read more about their fascinating operation which is totally in tune with the eco-times we live in, you can have a look at their facebook page https://www.facebook.com/goranskevunariceravnagora/

We had spent so long there that we had to give our second stop a miss.  So, forgoing the chance to walk round the lake at Fužine, we went straight to our lunch date at the Vagabonds’ Hut in the Bribir forest,  There we were again welcomed with a home-made spirit produced from berries gathered in the surrounding forest, before we settled down to an absolutely delicious lunch all prepared from locally sourced food.  The home-made pumpkin and also mushroom soups were to die for, the main course was an enormous platter full of wonderful meats and vegetarian options and we rounded off with delicious homemade desserts including a berry cheesecake and another made of oats and apples.

While we were there a coach load of Americans arrived, all of whom had either been born in this region or were descendants of people who had been born here before emigrating to the USA.  The advantage of this was a couple of musicians had been employed by their group organiser to play them music of their homeland – and we were able to enjoy it too, which really added to the experience. 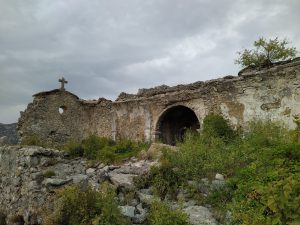 Just what you need after a large and delicious lunch is a spot of rock climbing and that was what was in store for us next.  Near the little town of Ledenice we were confronted with a craggy climb up a steep slope to reach some ancient hilltop ruins of a fortress that had belonged to the noble Frankopan dynasty.   We were also greeted by a splendid panorama of the Adriatic and the Island of Krk which spread out beneath us.  Then it was on to the town of Novi Vinodolski, so named because it is located in a valley (dolina) where wine (vino) is produced, and our day finished off at the nearby Pavlomir winery .  After being shown the cellars where the wine is stored and being told a little about their processes and history by the owner, we sat down to yet another amazing meal, to which sadly we struggled to do justice  – although there wasn’t much left of the platter of delicious homemade puddings made from cherries and apples.  It seems we really had reverted to childhood today and, just as children always can, we all found space for a lovely sweet pudding!

It was ten o’clock in the evening when we finally set off for our Lovran home which was more than an hour away and there was one more excitement in store for us.  Just as we were leaving the winery we came muzzle to bumper with a donkey which was standing four square in the road in front of us.  After a little while it condescended to move and we were finally on our way, dropping our guide Nada off in Rijeka before speeding on back to Lovran.  What an exhausting but absolutely wonderful day – and we won’t need to eat for the rest of our time here!!