Croatia excels in so many areas on the international stage, Naïve Art being a fine example. For the uninitiated, Naïve Art is a simple, unaffected and unsophisticated form of art and its principal exponents have normally had no formal training. It is characterised by an emphasis on vitality, colour, fun and story telling with less emphasis on some of the more “technical” aspects of art such as perspective, realism and scale.

In its early days it was mostly French painters, such as Henri Rousseau, who took the limelight, but it is widely believed that the richest vein of naïve painters has come from Croatia. Ivan Rabuzin, originally a carpenter by trade, started painting relatively late in life but French art critic, Anatole Jakovsky, described him as “one of the greatest naïve painters of all times and countries”. Rabuzin would have celebrated his 100th birthday on 27th March 2021 and, in honour of this centenary, in this interview with Jane Cody, Dr Svjetlana Sumpor, senior curator and collection manager at the Croatian Museum of Naïve Art, tells us more about him and his work.

1. Could you tell us a little bit about The Croatian Museum of Naïve Art and the history of naïve art in Croatia? 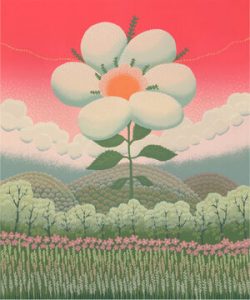 SS: The Croatian Museum of Naïve Art is the first museum in the world devoted to this kind of art. It was founded in 1952, after the first generation of Croatian naïve artists had made their reputations and started to achieve important successes. It was founded as the Peasant Art Gallery, the aim of it being to collect, study and exhibit the works of the “peasant painters” or “peasant sculptors”, as naïve artists were called at that time. As there soon appeared the need to collect and study the works of working class artists, in 1956, the name of the gallery was changed to Gallery of Primitive Art. The term primitive was gradually, in an attempt to avoid pejorative connotations, increasingly replaced in theory and criticism with the term naïve, and from 1994 the museum has been operating under the name Croatian Museum of Naïve Art. In its holdings the Croatian Museum of Naïve Art has more than 1900 artworks; about 80 of them are on display in the exhibition space. In Croatia, naïve art appeared in the 1930s, mostly thanks to the endeavours of the academy-trained painter Krsto Hegedušić. He was a member of the socially engaged artists’ group Zemlja (Earth) and he discovered and tutored the first Croatian naïve artist, Ivan Generalić, from the village of Hlebine (near Koprivnica), and backed him in his artistic ambitions. Krsto Hegedušić is considered the founder of the “peasant painting school in Hlebine”.

2. Where does Ivan Rabuzin fit into this history, that is, how would you describe his prominence or legacy in the field of Naïve Art, both in Croatia and internationally?

SS: The new Croatian naïve painters appeared on the art scene in the 1950s, and were called “the Independents”, for they were great individualists. Their art, in terms of theme, style and morphology as well as poetics, is entirely independent of the previously known art of the peasant painters, in other words, artists of the Hlebine School. One of these new, “independent”, artists was Ivan Rabuzin. His unique style has been recognised and greatly appreciated on a worldwide scale. With his original painterly visions of nature, he has made an outstanding contribution to naïve art in the world, many holding him to be the greatest naïve artist of all time.

3. How would you characterise Rabuzin’s style? Is there something particularly distinctive about his work that perhaps sets him apart from other artists in the field? 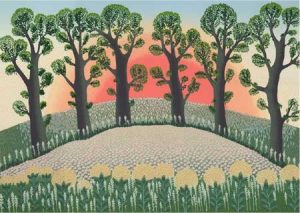 SS: Ivan Rabuzin is a painter of lyrical and idealised landscapes founded on the sequencing of circles or circular forms, brimming with optimism and spirituality. Among naïve artists, Rabuzin stands out for the distinctive modernism of his visual expression, manifested in the particular kind of stylisation abstraction, the reduction of the visual material to geometrical forms, and for this reason his oeuvre stands high in the heritage not only of naïve but of modern art in general.

All of Rabuzin’s paintings vary and combine a few basic motifs: hillocks, clouds, the Sun, woods and flowers. In terms of composition, the recognisable elements are subordinated to the symmetry and overall rhythm of the picture, and sometimes his paintings strike a balance between the familiar and the abstract. A lyrical mood is achieved with the use of light, bright colours and soft rounded forms. The favourite shape of Rabuzin is the circle, symbol of integrity and perfection, while the symmetry in his oeuvre represents the manifestation of cosmic harmony and the divine order.

4. Are you aware whether Rabuzin was influenced or mentored by anyone in particular, or a part of a group, and did he go on to influence other individuals or groups?

SS: Important roles were played in the recognition of Rabuzin’s talent and the making of his reputation by the critics Mića Bašičević (then curator and manager of the Gallery of Primitive Art in Zagreb) and Radoslav Putar. On many occasions, Rabuzin was mentioning these art historians with great gratitude and appreciation. Mića Bašičević was the first person who noticed the emergence of Rabuzin’s individual style, i.e. his basing the image on the composition of the circular forms, and he encouraged him to continue working in that way. Rabuzin does not have followers, in the sense of an art group or a school. That is not surprising, since it would be very difficult, without imitating, to creatively build upon such a distinctive, individual style.

5. I understand the museum has plans to mark Rabuzin’s centenary; could you tell us a little about your programme and where we can find out more? 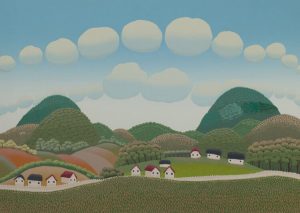 SS: Rabuzin is one of the most important artists in the collection of the Croatian Museum of Naïve Art and the most beloved one among the visitors of the museum. To mark the centenary of his birth, we are organizing the symposium Ivan Rabuzin and Nature Symbolism in the Art of the 20th and 21st Century. Because of the pandemic situation caused by Covid 19, the symposium is taking place virtually, on the Microsoft Teams platform, on 25th and 26th March 2021. Everyone interested is invited to attend, all that’s needed is to apply for the link to: info@hmnu.hr. We are going to have 22 papers presented, some of them by distinguished Croatian art historians and scholars, and some by emerging young scholars. Unfortunately, all papers are in Croatian, but we hope to be able to publish the bilingual symposium proceedings, in Croatian and English, after the symposium. Along with the symposium, we have prepared a new exhibition, From the Collection of the Croatian Museum of Naïve Art, with the special emphasis on the works of Ivan Rabuzin.

6. Do you hold a wide range of his art and did his style change through his artistic career? 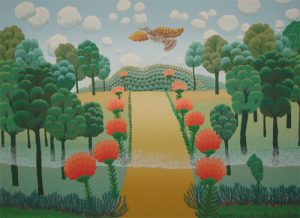 SS: The Croatian Museum of Naïve Art holds a very representative collection of Rabuzin’s works, among which are 31 paintings and 8 drawings. The Museum owns the painting On the Hills – Primeval Forest (1960), which is by many art historians considered his best masterpiece; also the paintings Orehovec Hills (1959) and Možđenec Woods (1959), which are the earliest examples of his distinctive style, i.e. painting with circles and dots; painting Field in the Hills (1968), which inspired the making of the ceremonial curtain with the same motif at the Takarazuka Theatre in Tokyo, etc. Art historians are not in the habit of distinguishing different stylistic phases in his work, and his style did not change drastically with the years, but an experienced eye would not have much difficulty recognizing whether it is looking at the early or late work.

7. Are there resources you could point us to that indicate where his work can be seen internationally?

SS: Rabuzin has many admirers in Japan; beside the curtain (1980) at the Takarazuka Theatre in Tokyo, there is a tapestry (1983) made after his drawings for the lecture hall of the Museum of Modern Art in Urawa, Saitama. Rabuzin’s works are also in the collections of the Sammlung Zander in Bönnigheim (Germany), Museum am Ostwall, Dortmund (Germany), Musée International d’Art Naïf Anatole Jakovsky, Nice (France), Museum of Naïve Art Ilijanum, Šid (Serbia) and Museum of Naïve and Marginal Art, Jagodina (Serbia). Of course, a great many of his works are also in private collections around the world.

8. How do you see the future of Naïve Art in Croatia and internationally? For example, is there new blood coming through and do these young painters remain, in general, “amateurs”, without any formal art training?

SS: There will probably always be self-taught people, without formal training in art, who will try their hand and luck in painting, sculpting, drawing… However, the living conditions have changed globally and drastically, in comparison to the conditions in which naïve artists had lived and worked. The world is much more connected than it used to be, thanks to the development of technology and social media, and we live in constant surge of information, so that the kind of isolation in which Croatian naïve artists had lived is not possible any more. 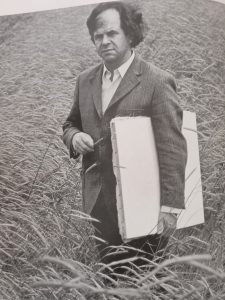