26-year-old Ed Thomas runs the Amedea in Whitstable, Kent, which he describes as a half Croatian Cafe-Bar. He says of his background: “My parents consist of the most accidentally-hilarious Croatian university drop out you’re likely to meet – my mum – and the other one still wears flip flops in October and has run a shop called ‘Kites & Things’ for longer than I’ve been alive – my dad”.

After a visit to the bar, a Q and A with Ed was clearly in order.

Why did you open Amedea, and why in Whitstable?

I’ve always quite liked working in hospitality, and I’ve also learnt that you don’t need to be serious and boring to have good customer service. I think I learnt this partly from my dad, partly from Croatian waiting staff who can be completely deadpan, but also pushing their luck with how cheeky they’re being, all at the same time. With this, and enjoying hosting, playing music and drinking in comfort in mind, I decided to open Amedea. People in Whitstable are usually quite interesting. I thought that if anywhere would accept such an obscure idea for a business – bearing in mind, my dad’s shop actually works – it would probably be here. 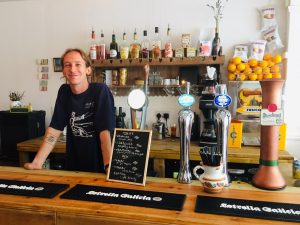 Ed behind the bar

Why is it a half Croat bar?

Well I’m only half Croat. Also, not everything in the bar is from there. The wines, spirits and decor are mainly all Croatian, but the beer and food is a mix from all over that part of Europe.

Tell us why you called it Amedea

Amedea is my nice little grandma! She turned 80 earlier this year.

Ed, Amedea and his partner Abbie

Which Croatian wines do you offer? And what is your favourite?

We sell Graševina, Traminac and Malvazija from Croatia, as well as some reds from Bosnia including a very nice Plavac [more usually found in central and southern Dalmatia]. Malvazija is easily my favourite! It’s what we usually drink when we’re seeing family there.

Istria is clearly important to you, what are your favourite places there?

It is! My mum’s from a little village called Kanfanar which is lovely, but we also like visiting Rovinj and Bale.

How have the people of Whitstable responded to the bar? Have they developed a taste for Croatian wine?

Yes I think very well so far. A lot of people that come in have been to Croatia before and want a reminder of their trip, usually in the form of a Medica or a Slivovica! Equally though, a lot of the people that come to Amedea have never visited Croatia, and come in purely out of interest, hopefully enjoying their experience just as much!

The Traminac is our best seller by far, mainly because I think it’s fairly incomparable to other wines you find in the UK… and here it is in Whitstable. So far I’ve got wine and a mum from Croatia, I’m honestly not sure what’ll be next.

Next time you’re in Whitstable, why not check out Amedea and try some of the wines on offer?