Croats In London – 50 Years Of The Croatian Chaplaincy

Croatian Language SchoolnewsletterCroats In London – 50 Years Of The Croatian Chaplaincy

Brian Gallagher writes on a major anniversary for the Croatian community in London. 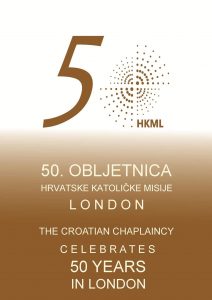 The Croatian Chaplaincy in London has just celebrated 50 years of its establishment. The Chaplaincy has evolved into the centre of the Croatian community.  To celebrate, there have been a number of events, headed by Fr Ljubomir Simunović, who heads the chaplaincy.

The chaplaincy has been a mainstay of the Croatian community for 50 years. Indeed, under the leadership of Fr Ljubomir, the Chaplaincy is firmly at the centre of London’s Croatian community. It has reached Croatians beyond London and has even helped establish a Croatian church presence there.

Fr Ljubomir’s tenure has also seen the emergence of Most magazine, a yearly periodical that contains articles in both Croatian and English regarding Croatian matters – it is the only publication of its kind in the UK.

At the Croatian church a special service was held at the Catholic Sacred Heart Church on Horseferry Road on 8th December, where Mass in Croatian is conducted every Sunday. In attendance were a number of dignitaries. The Croatian Ambassador to the UK, His Excellency Igor Pokaz, was in attendance along with military attaché Colonel Damir Terzić and other members of the Embassy.  From Croatia came the Most Reverend Dr. Zelimir Puljić, the archbishop of Zadar and the president of Croatian Bishops’ Conference. Also present was Dr Br. Marko Mrso, the Provincial of the Friary province of the Most Holy Redeemer (Split) and the Rev. Dr. Tomislav Markić, head of the Pastoral Ministry for Croats Abroad.  Special guests were also in attendance from the Catholic Church in the UK: The Right Reverend Paul McAleenan, Auxiliary Bishop in the Archdiocese of Westminster and Rev. Shaju Varkey, Episcopal Vicar for Ethnic Chaplaincies. 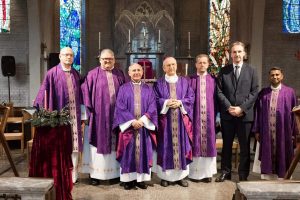 Fr Ljubo (2nd from left) with the dignitaries in attendance, including His Excellency Igor Pokaz (2nd from right).

Fr Ljubo gave a speech in regard to the Chaplaincy’s role in UK. He said, “The Croatian Chaplaincy has played – and is still playing – an important and, indeed, essential role in the lives of our fellow Croats, who represent one of the smaller Catholic communities in this country. In this endeavour, we have always enjoyed the wholehearted support of the Catholic Church in this country.”  The Chaplaincy, “…continues to care pastorally for Croats in the United Kingdom, it gives proximity to those who are most needful, but also furthers and safeguards Croatian identity and culture in this part of the world.”

Mention was also made of those no longer with us such as Branko Franolić, Krsto (Chris) Cviić and Tomislav Tomo Ramljak.

At the end of the Mass, music was provided by the Dubrovnik tenor Stijepo Gled Markos. 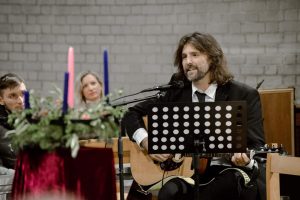 The celebration did not end there. Directly after Mass, everyone headed over to Westminster Cathedral Hall for an excellent reception, where many people renewed acquaintances old and new. 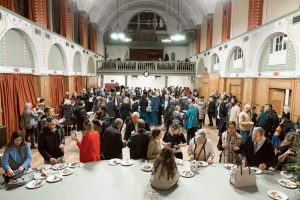 The Reception at Westminster Cathedral Hall

The anniversary was covered by items in the February issue of Oremus, the magazine of Westminster Cathedral.

On 17th December, the Croatian Embassy hosted a Christmas reception for the Croatian community. On behalf of Croatian President Kolinda Grabar-Kitarović, Ambassador Igor Pokaz presented Fr Ljubomir an award for the Chaplaincy for promoting Croatia over this last half century. It was well deserved, and a good start for the next 50 years. 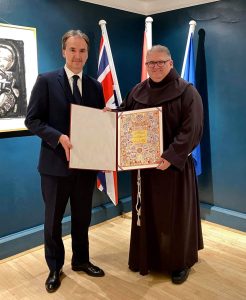 Fr Ljubo, with HE Igor Pokaz, holding his award from President Kolinda Grabar-Kitarović

Photos courtesy of the Croatian Chaplaincy.