In the next of our occasional series of Q and As with Croats in London, Brian Gallagher explores the work of author and Cybertourism expert Domagoj Bebić PhD. 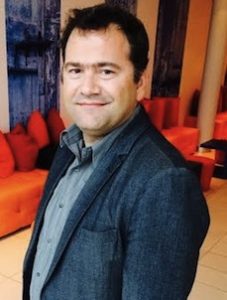 Domagoj Bebić is an Associate professor at the Faculty of Political Sciences in Zagreb , where he runs several courses in the field of the new media. He attained his PhD in 2009 on the subject: The Role of the Internet in Political Communication and Encouraging the Political Involvement of Citizens in Croatia: the Election Campaign on the Internet, 2007. He is the author of several scientific papers and chapters in books related to the new media. He is the general secretary of the Institute for New Media and eDemocracy – Inmed. He has worked on many destination branding projects, especially in the context of tourism and increasing the competitiveness of destination and projects.

He is the author of The Cybertourist: The New Media in Tourism

We caught up with him to discuss his book, and how Cybertourism applies to Croatia .

How would you define Cybertourism?

Never before have the media been so fast, interactive and engaging.  Moreover, the Reuters Institute Digital News Report brings data about rising impact and a more intensive use of social media as information platforms. By their report more than half of all online users across the 36 countries (54%) say they use social media as a source of news each week and there is a rise in the use of messaging apps for news as consumers look for more private – and less confrontational – spaces to communicate. This data indicates that users are looking for a more personal, interactive and faster access to information and that massive change in media habits can be observed year after year. Social media has also changed users’ media habits and needs. And this is a basis for The Cybertourist: explanation of current trends and their implementation in tourist sector. To provide answers my book proposes main questions such as:

How to attract the attention of users in the 21st century? How has media logic changed over the past decade? How to expand one’s influence in the digital media? How has the behaviour of tourists changed and how can we respond successfully to this? How to brand a tourist product successfully and what are the elements involved in that process? What does project and strategic communication involve in tourism? How to approach the promotion of tourist destinations and content in a creative and different way? How to create and run visual campaigns and what is their advantage? How to transform visitors into promoters of our tourist brand or destination? Who are the key players on the web?

The book covers these and other topics of importance for every manager in tourism, representatives of local communities, the staff of tourist boards, entrepreneurs, as well as professional workers in public relations, students and communications experts.

This book can be used by all those who are training or who wish to improve their knowledge in the field of the social media and their use in tourism.

How has Cybertourism affected Croatian tourism and how well is Croatia utilising it?

In Croatia we are aware that the time of loyal guests who stay long, who inform themselves via brochures and tourist offices and who return, are behind us. We have entered the time of weekend and one day tourists who inform themselves via social media, who trust other online recommendations, who use TripAdvisor and other reviewing sites, etc. A good example in Croatia is the case of the popular TV series Game of Thrones. Even though we have rich history and the most beautiful coast in the world – we really do 🙂 – the popular TV series attracted visitors worldwide to come to Croatia and to see the filming locations. These locations were promoted via new media, which was a great channel for promoting the role of Croatia in this series. Today we have tourist tours for example in Dubrovnik and Split that are focused on providing a unique experience for visitors to see the locations. This is just one example of the change in tourist promotion.

Croatia is still implementing Cybertourism. That means that Croatia is using new media channels to promote itself but can do much more in new media promotion. The Croatian Tourist Board uses content, platforms and strategy to engage users on social media, to promote Croatian beauty and also alternative contents and services. Destinations in Croatia are to communicate via new media to engage users and to promote tourist opportunities.

There are still lots of possibilities to promote destinations through Cybertourism.

You use futurist Alvin Toffler’s term ‘prosumers’. How can Cybertourism work to bring such prosumers not only to Croatia in the first place, but also back again?

If we had to choose a single word to best describe today’s world and the time in which we live, then that would be ‘change’. From how we are informed, our communication and networking, to a redefinition of values, habits and needs, change brought about by the development and popularization of digital platforms is taking place in every aspect of our everyday lives. This has brought, on the one hand, new challenges and new channels of communication, but on the other they have made it possible for everyone to become part of a single global network, which is not restricted by time or space, and is accessible and open to everyone. In the 21st century communication has taken on the dominant role in space and time on a global level. And the most obvious change is in the users – who are not passive and distant, but active, engaged and important in the digital sphere.

The main task for destinations and tourist brands worldwide is to attract the attention of prosumers and engage them with content and messages that are appealing and interesting. The shift in attracting guests is not anymore in massiveness but in the individuality. The goal in attracting prosumers to return to a destination is in redefining and reinventing new content and possibilities for tourists.

Why? Because beside the communication shift, we have entered the trust shift too. The data indicates that there is a decline in trust of the media, and a rise in trusting other internet users – other prosumers. This indicates the role of prosumers not only in communication, but also in recommendation.

Investment is obviously required, but could Cybertourism techniques be used to create interest in such things amongst travellers who are looking for something different? I was thinking of things such as Tito’s nuclear bunkers on Vis , or places like Vukovar which could attract visitors for the history of the Homeland War as well as areas such as city weekend breaks and so on.

Of course, and this is already happening in Croatia. In the last couple of years Croatia made a giant effort in promoting alternative content and tourist experience. From World’s First Underwater Stations of the Cross, Brijuni safari and Tito’s villas in Istria, aquaparks and resorts that are alternative tourist offers in Croatia. Advent in Zagreb, music festivals, and alternative museums are also becoming important factors in Croatian tourist promotion. The Homeland War has huge possibilities for tourist promotion and I believe that Vukovar will profit more from this in the future. Dubrovnik is good example how to combine history, wars and the city’s identity in its tourist offer.

What role – if any – should local and national state bodies play?

Tourism is one of the most important economic factors in Croatia and tourist traffic in Croatia has been increasing in the last decade. The Ministry of Tourism and the National tourist board of Croatia play important roles in promotion. The minister of tourism was present at the Cybertourist promotion in Zagreb . He emphasised the importance of new media and alternative ways for destination promotion, as well as the role of user generated and created content. So, this indicated the awareness of the role and importance of new media channels as an additional promotion channels. By the law and by the organizational structure Croatia has a legally regulated system of promoting Croatian tourism through national, regional and local organizations, i.e. offices that deal with tourism promotion of certain areas. Their role is to have responsibility in tourist promotion of local, regional and national context – so they are crucial in the organisational part of tourist promotion and the connection between old and new ways promotion.

Where do you see the future of Cybertourism?

Not in Facebook, or Instagram or smartphones… but in the change of communication patterns and further connection and engagement with users. The Cybertourist is not about the current trends and changes, but about the shift that has started. So, I see the future in tourist promotion and communication in more personal and dynamic communication. The shift will emphasise the role of users in the communication process and e-WOM (electronic World of Mouth) in tourist promotion and communication. So the future of Cybertourism lies in new trends, new platforms and in new possibilities. Our goal is to recognise chances in making new ways to attract new guests. So the future is definitely new – for all of us.

The Cybertourist: The New Media in Tourism can be reserved and bought via mail order: info@edemokracija.hr

Follow this link for the Institute for New Media and eDemocracy – Inmed: www.edemokracija.hr