From her transit base in Makarska, our intrepid reporter, Julia Molden, prepares us for the start of this year’s Croatian Language School Culture and Language Course on Vis island with a couple of preliminary and very contrasting adventures: visiting the source of the Cetina river and a trip to Međugorje, Bosnia, an important spiritual centre. 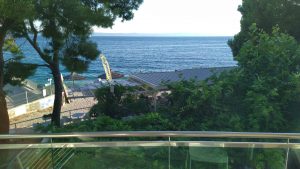 Once More Unto The Breach Dear Friends

After a break in 2020 because of the pandemic and then last year’s delayed trip in September for the same reason, we are once again on our travels round Croatia in June and this year we are visiting the island of Vis.  Prior to Saturday’s start date, John travelled out to Zagreb on Tuesday from Stansted while on Wednesday Dr John and I were up bright and early to get to Heathrow in time for our flight to Zagreb.  When we arrived, we collected our hire car and set straight off on the journey south, which in total took about five hours arriving in time for supper in Makarska fairly tired from a day which had started at 05:30 and had run and run. 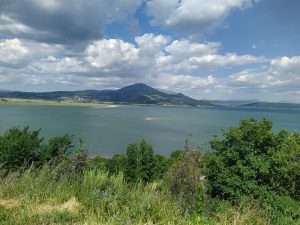 After an early night we got up the next morning ready for a trip to visit the source of the Cetina river, which flows to the sea at Omiš and along which I had travelled in 2013 in a mild version of white water rafting.  This time we were travelling to its beginnings high up in the mountains and, when we found it, it was a very deep hole in the ground from which the water rose up and then flowed into the start of the river.  Divers 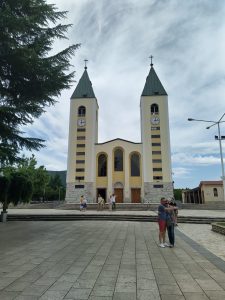 have been down the hole for one hundred meters and more and still have no idea how deep it actually is but the water was very cold, clear and fresh and the hole was very blue.  After that we drove on into Bosnia and drove round Buška lake before returning to Makarska for supper and another early night.

The next day we were up again ready for another trip into Bosnia this time to visit Međugorje, an important spiritual centre, where in 1981 a vision of the Virgin Mary is said to have appeared to a handful of residents.  This led on to its development as a shrine and place of pilgrimage and ultimately to the opening of a hoard of tourist shops, selling anything from candles and rosary beads to the Virgin Mary in a snow storm.   With cafes and restaurants also piling in, the vision certainly did a power of good for the local economy as well as offering spiritual fulfilment for people from all over the world.

After we returned to Makarska and had a swim, we started to prepare for the arrival of Linda and John, who had been travelling down from Zagreb while we had been visiting the sights of Bosnia.  The day culminated in an evening meal altogether talking excitedly about our plans for the coming week on Vis.