Cursed Croatian Quakes! A Report On The December 2020 Earthquake In Petrinja

Croatian Language SchoolnewsletterCursed Croatian Quakes! A Report On The December 2020 Earthquake In Petrinja

Just a short time after the recent major earthquake in central Croatia, Croatian Language School student, Sarah Smucker, and her husband, Leo Blokar, reflect on the scale and history of the tragedy and ask us all to spare a thought for the residents of this troubled area. Photo credits are at the end of this post – some were clearly taken in happier times before the earthquake.

140 years ago, in the year 1880, a mighty earthquake struck Zagreb, a provincial state capital of the kingdom of Austro-Hungary, destroying much of the city. The mayor of the time proclaimed a law forbidding people to curse God so as not to further offend the Almighty and incur additional vengeance. A penalty was publicly announced. In the meanwhile people prayed and cursed countless times. Zagreb is of course, nowadays, the capital of the republic of Croatia, which has been a member of the EU since 2013.

On March 22nd 2020, during the first lockdown due to corona virus, a 5.2 earthquake struck Zagreb again, damaging some 26,000 buildings, nearly 2,000 of which were subsequently declared uninhabitable, as well as causing 27 injured and the death of a 15 year old girl. The centre of Zagreb and many historical buildings, such as the Arts and Crafts Museum, were seriously damaged. The cost of the damage was estimated at 5.6 billion euros.

The earthquake added to the national sorrow as Covid-19 threatened the tourist season and the economy at large. Peoples’ confidence was shaken and the nation’s goal was to reach a new year and a new beginning, in 2021.  Decorations were placed in public places, churches, and private homes. Christmas passed relatively uneventfully, and smoothly. 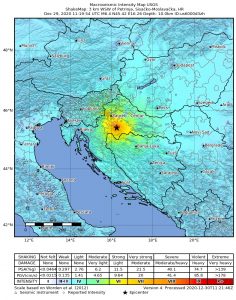 Then, three days before New Year’s, on December 29th, a huge earthquake, of 6.3 on the Richter scale, struck the area of Banovina, 60 kilometres south of Zagreb. The epicentre was about three kilometres north of the small town of Petrinja and also badly affected many neighbouring villages and towns such as Glina, as well as the administrative capital of Sisak. The quake was felt strongly in Zagreb and in a total of ten countries, as far north as Munich, in Germany, as far south as Rome, in Italy, and even the historic centre of Vienna, in Austria, was said to have shaken strongly.

One eye-witness said it felt as if the ground was undulating in waves under her feet as the walls moved horizontally back and forth around her.  A total of seven people lost their lives, including a seven year old girl. The small village of Majske Poljane, with a population of just under 200, lost five people.  Two thirds of the city hospital in Sisak was damaged so badly that the patients had to be housed in the remaining building or sent to Zagreb. 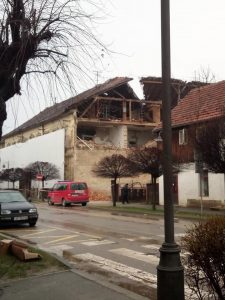 The Mayor of Petrinja was holding a press conference in the city centre around noon on that day when the quake struck, and the shaking was filmed live on camera as the historic centre half crumbled to the ground. It was suggested that nearly 90% of the town centre will have to be demolished and rebuilt.

The region of Banovina was severely affected during the Homeland War and many of the houses were badly repaired. Total Croatia News reports that it is estimated that only around 15% of houses in Croatia are insured against earthquakes, and this is surely a tragedy of grave proportions for the region, which was already devastated by economic decline and depopulation.  Restoration will take many years.

Immediately after the quake the Red Cross and Croatian National Army were on site to provide food and shelter. Donations poured in from neighbouring countries as well.  One of the most touching sights was the arrival of private citizens who came in cars loaded with food and supplies to provide solidarity and support to the shocked and disoriented citizens.  There were so many caravans of people who came to help that the mayor of Petrinja begged people to please wait, as organization became a challenge.

Petrinja and its surroundings are an agricultural area, so many horses, cats and dogs and other domesticated animals looked on confused as the aftershocks continued unabated in the subsequent days.  The days following the quake have been cold, foggy and rainy. As millions celebrated the dawning of the new year 2021, many citizens of Banovina stood or sat in front of their houses on mattresses or chairs in the cold, looking dazed, waiting for supplies from the Red Cross or army.

This little known area of Croatia has a long history.  The region of Banovina has been inhabited since prehistoric times. Sisak, the administrative capital, on the confluence of the Kupa, Sava and Odra rivers, the largest river trading city in Croatia, was inhabited by Celts, Illyrians and later Romans. It became one of the most important trading and strategic centres of the entire Pannonian region during the reign of Augustus. Its fortress was crucial in the joint defeat of the Ottomans in the Battle of Sisak in 1593.  Nearby Petrinja, located on the right bank of the Kupa river, was a medieval town that was also fortified during the warring times with the Ottoman Empire. It had a lively cultural and trade life from the late 18th and 19th century, including its own orchestra since 1808.  Though the economy of the town has still not fully recovered since the war, the headquarters of the Gavrilovic meat factory, as well as the wood industry, provide the main sources of economic activity.  The region is also known for its pottery. For a small town of around 25,000, Petrinja had a lovely, harmoniously arranged centre. A large city park provides the central axis around which the town was laid out with many Baroque, Historicist and Art Nouveau buildings, most of which will have to be demolished and rebuilt. 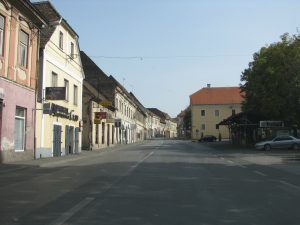 At the time of writing of this article, the ground continues to shake in Petrinja and the Banovina area, with some 300 aftershocks and smaller but strong earthquakes of 3 and 4 points on the Richter Scale recorded in the space of a week. Villagers must continue to care for their animals and many citizens report being on the edge of sanity. As the aftershocks continue, those who still have houses run out into the street when the shaking begins, for fear of being injured inside.

Winter has just set in, curses are sent to the past year of 2020 and prayers to the present 2021. The uncertainty of the global situation is frightening, but not as terrifying as having no roof over one’s head. Studying Croatian grammar and vocabulary is good-hearted play in comparison. Wherever you are, we wish you all the best, and please spare a thought for the struggling residents of a small valley in central Croatia.

Many thanks to Sarah and Leo for their empathy, extensive research, and for summarising the situation and context so succinctly.

For those who want to find out more, here are a few links to further information sources: 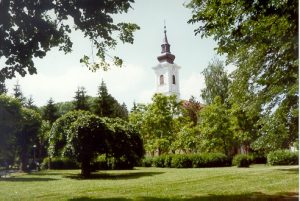 Expat In Croatia – How To Prepare For And Handle An Earthquake