Someone has brought out a book describing Victorian parlour games that our ancestors used to play in the evenings before TV arrived to capture and enslave our interest. With many British households suffering electrical power cuts over Christmas, these games may well stage a revival especially when we experience the power outages that are forecast for the future.

Anyone who has sailed with me in small boats either as crew or as students may have experienced some of these parlour games already. Faced with a passage of some hours in a choppy sea – mostly in UK waters, I hasten to add – I found it vital to keep the minds of people sitting in the cockpit occupied. If silence prevailed as spray broke over them, gradually faces would go grey, then green as they convinced themselves of the uncomfortable situation they were in. Before the inevitable happened, I would institute a competitive parlour game; it might be the Geography Game, where in turn participants have to nominate a geographical feature – anywhere – beginning with a particular letter. Or, the “ I like apples, I don’t like pears” game, where the leader judges whether or not players’ similar preferences are valid without their knowing why. There is a secret which, usually, players work out one by one, then join in the fun until the last person sees the light; this can take a long time. There are many variants, including the validity of the statement depending on some irrelevant factor such as the way the player is sitting. 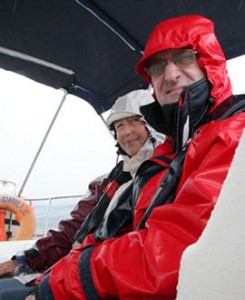 I have long believed that mal de mer, or morska bolest, has a lot to do with the mind. It is a horrible and disabling affliction, but is one of the few that can be cured immediately, usually by entering port or seeking calm seas. As in so many diseases prevention can be much better than cure, and in my experience keeping minds busy invariably worked and, as the Victorians found, could be fun.

So, grateful thanks to our forebears, don’t despair when the power fails, and Good Sailing.