Glamping on the Coast of Croatia

Jane Cody, author of the Croatia Cruising Companion and prolific blogger on all things Croatian, discovers some very special places where you can get back to nature in Croatia, without compromising on comfort and style.

In the previous article the topic of Glamping in Croatia was introduced. Here Jane continues with a breakdown of some of the best glamping sites on the coast of Croatia.

If it’s sunshine and sea you’re after, where better to make a base close to nature than the small undiscovered island of Lošinj? Lošinj Glamping at Camp Čikat gives you the best of both worlds. It’s a big campsite, with all the usual extensive facilities, but the two Glamping areas are set back from the main camping area. The five safari tents of Glamping Village Wild are located 100 metres from the sea, near the mobile homes village. Each provides 25 square metres of indoor space and 15 square metres of terrace to give a large indoor/outdoor living area with a fully equipped kitchen.  There are two double bedrooms and the sofa in the lounge coverts to a double bed. Electricity and WiFi are available inside the tent, the water tap is just outside, and, about 50 metres away, is a modern well-equipped sanitary block with toilets, showers, dishwashing, laundry, washing facilities, baby changing and more. Expect to pay €69 to €168 per tent per night, depending on the season, plus a cleaning charge of €30, plus tourist tax. 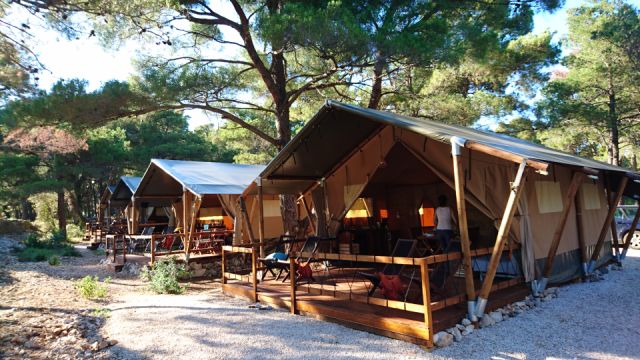 The 20 luxury safari tents of Camping Village Aquapark are located amongst the pine trees near Aquapark Čikat, and offer 35 square metres of accommodation. Facilities and amenities are similar to those offered in Glamping Village Wild but it’s a slightly longer walk to the sea. Prices range from €50 to €135 with a €25 cleaning charge plus €5 if you have a dog, plus tourist tax.

The biggest glamping advantage for Lošinj Glamping is its location on the island of Lošinj. Small though it is, at approximately 20 miles long and two miles wide, it’s difficult to think of a more idyllic Croatian island than Lošinj. Only recently, Finn whales were spotted of its coast, adding to the spectacle of the regular dolphin visitors.

Local resident and botanist Ambroz Haračić (1855 – 1916), first put Lošinj on the tourist map in the 19th century when his eighteen years of research on the climate, flora and fauna, resulted in the island being declared a climactic health resort, attracting the great and good of the Austro-Hungarian Empire. Given its heritage, its not surprising that Lošinj is known as a wellness centre but perhaps we could also award Haračić the title of “grandfather of Glamping” as, in addition, he was responsible for the forestation of Čikat, a previously barren area of the island. 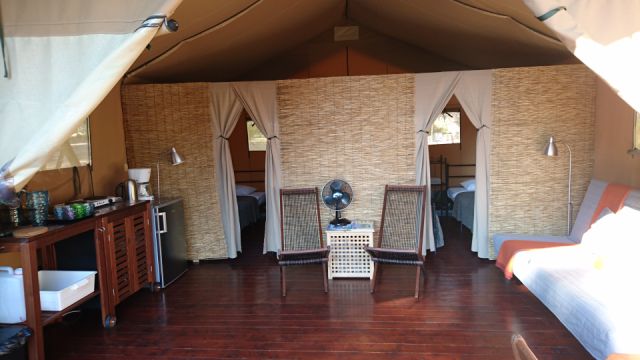 However there’s much more to Lošinj than its healthy climate and fragrant air – it’s a little bit harder to get to than some of the other islands, but still very accessible, and that tends to keep summer visitors down to the discerning and select few, rather than the throngs you might find in more discovered Croatian destinations. The main town, Mali Lošinj, is known for the quality of its restaurants, rather than the quantity, as well as its understated, yet classy, Mediterranean charm – what better backdrop for the perfect Glamping experience?

If, however, you want to get away from almost everything and everyone, then you’ll need to take a longer journey, to the remote and virtually uninhabited island of Biševo. This tiny island lies off the larger and better known island of Vis, a two hour ferry ride from Split.

Known for its blue cave – a trick of the sunlight through a hole, at a certain time of day, which makes the cave glow a brilliant blue – Biševo is about as remote as you can get. Such tranquillity comes at a price though and much of the “Glam” of this particular camping experience is about how to make the best of the island’s considerable natural assets. 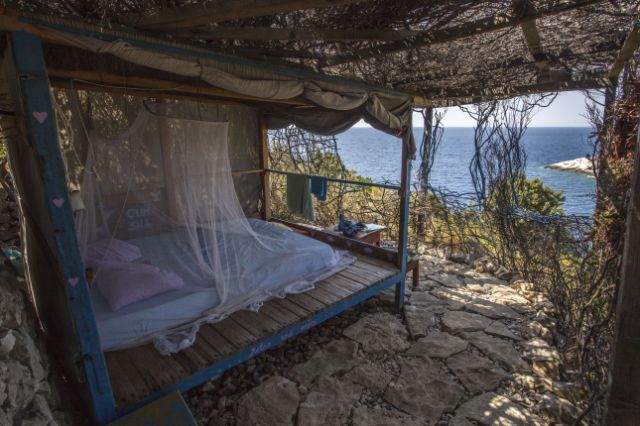 Davor Božanić, the resourceful owner, has crafted the three eco shelters, accommodating four people in two bedrooms, from wood and stone. There’s no mains water or sewage system on the island and so the shower is a suspended watering can and the toilet is a hole in the ground with a bench over it, in a separate little hut.
Holidays here take a little bit of planning but Davor will cook you dinner in his own house, a short walk away, there’s a mini camping fridge to keep your drinks and snacks cool, and you’ll be provided with sheets, chairs and other basics. Depending on the season and the weather, Davor will also take you on a foraging hike on the island, or a boat trip around Biševo, or to the nearby volcanic island of Brisnik, perhaps in a replica of a traditional fishing boat – the Gajeta Falkuša. 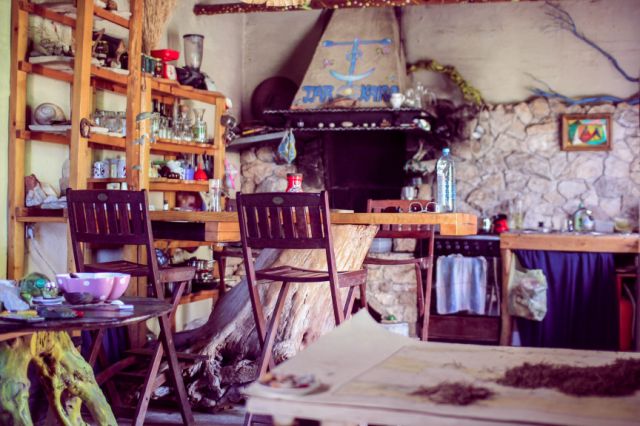 Expect to pay €35 per person per night including breakfast in the restaurant. Meals are €25 per person and the cost of organised trips varies between €10 and €70. 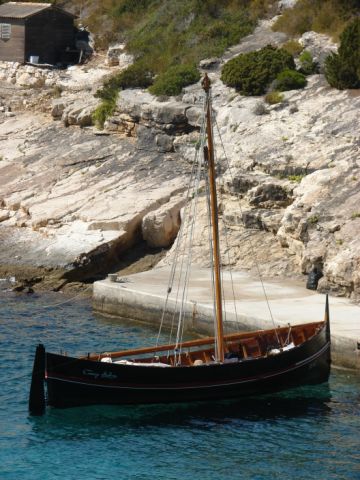 If the remote solitude of Biševo is a little too quiet for you then perhaps Zaton Holiday camp is more your kind of Glamping destination. Like Čikat in Lošinj, it’s another large campsite, with over 1,000 pitches, but it offers a variety of styles, including Safari Lodge Glamping tents. Installed in 2016, they offer the best in modern facilities including satellite TV, 4 ring gas cooker, fridge, microwave, coffee machine, and of course a power supply. In a space of just over 40 square metres including a partially covered patio, you’ll find a double room with a queen sized bed, a twin-bedded room, a shower/toilet and a living/dining area with a corner kitchen. This will cost €60 to €192 per day, plus tourist tax, depending on the season, with a minimum stay of 3 days off season and 7 days in high season (1st July to 18th August). 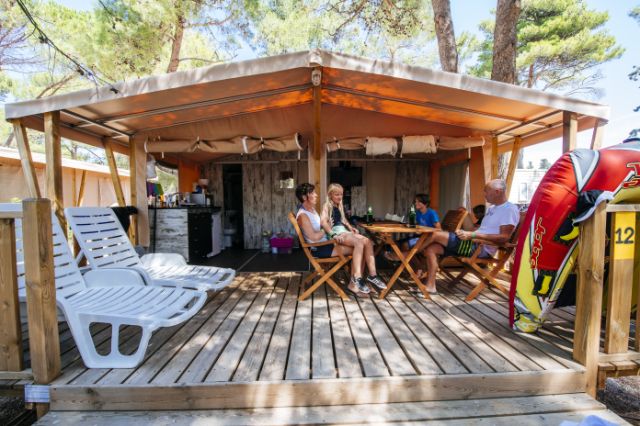 The resort itself offers just about every conceivable sporting facility you could imagine, including horse riding, diving, tennis and windsurfing, and features a huge and recently renovated pool complex with a variety of pools for different age groups and purposes. The, mostly sandy, beach stretches for over one kilometre and slopes gradually making it ideal for children; it also offers disabled access, climbing nets, beach volleyball, drink and snack bars. There’s a good choice of restaurants to suit most budgets and tastes, and for entertainment there’s live music and dance, karaoke, themed evenings, folk and cultural programs and a variety of other shows and events. It’s really a holiday village so you’ll also find a good range of shops and services, including hairdresser, bakery, supermarket and shopping shuttle bus to the town of Zadar, newly inscribed onto the UNESCO World Heritage list for its examples of Venetian works of defence between the 16th and 17th centuries. Even closer than Zadar is the even more historic town of Nin with its 9th century cathedral and 11th century church. 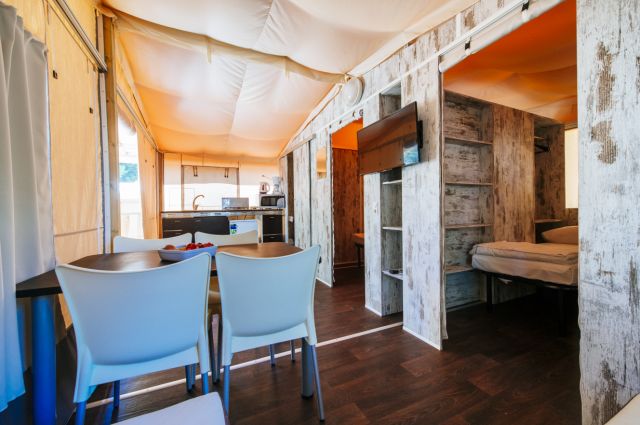 Next week’s article will feature some of the best inland glamping sites in Croatia. 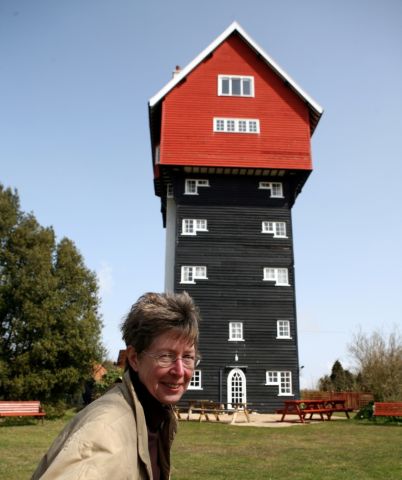