By Julia Molden and Linda Rabuzin

This is the good bit about learning a language. All those hours of learning vocab and grammatical endings get a chance to be put into practice and you find out how much you can remember, while enjoying all that your destination has to offer. That can be as surprising as how much you can actually cram into a couple of days, as I found out last weekend.

Having negotiated my way from Zagreb airport to the central bus station and thence into town on the number 2 tram, I picked up a message from Linda announcing that we were to attend the premier of the rarely performed Verdi opera, Sicilian Vespers, at the National Theatre that evening. Not only was it the premier of this particular run but also the first time it had ever been performed in Croatia. The prospect of a production lasting four and a half hours required a bit of mental preparation on my part, as I was already flagging slightly from the early start from London. Lunch was definitely in order, so I made a beeline for a gostionica that I knew had an enclosed garden, where I intended to soak up a little autumnal lunchtime sunshine while refuelling myself. That done, I moved on to Jelačić Square for coffee and cake, while I watched Zagreb life going about its business.

Come the evening, refreshed and rested, I set off to the theatre with Linda to take our seats high up in the gods with a bird’s-eye view of the spectacle to come. Meanwhile the great and the good of Zagreb society were assembling downstairs in the stalls. I surprised myself, as a ballet rather than an opera fan,by how much I enjoyed, and how well I coped with, four hours of sitting still and concentrating on the wonderful singing (allegedly in French, although almost the only words I could decipher were ‘mon fils’) while simultaneously comparing and contrasting the Croatian and English surtitles – when they condescended to work, that it. Otherwise, it was rather guesswork as to what was actually going on, although by and large I got the drift of who was doing what to whom. There was a moment just before the second interval when the stage was full of performers and the whole auditorium swelled with the richness of their massed voices. That is a moment that will stay long in my memory. 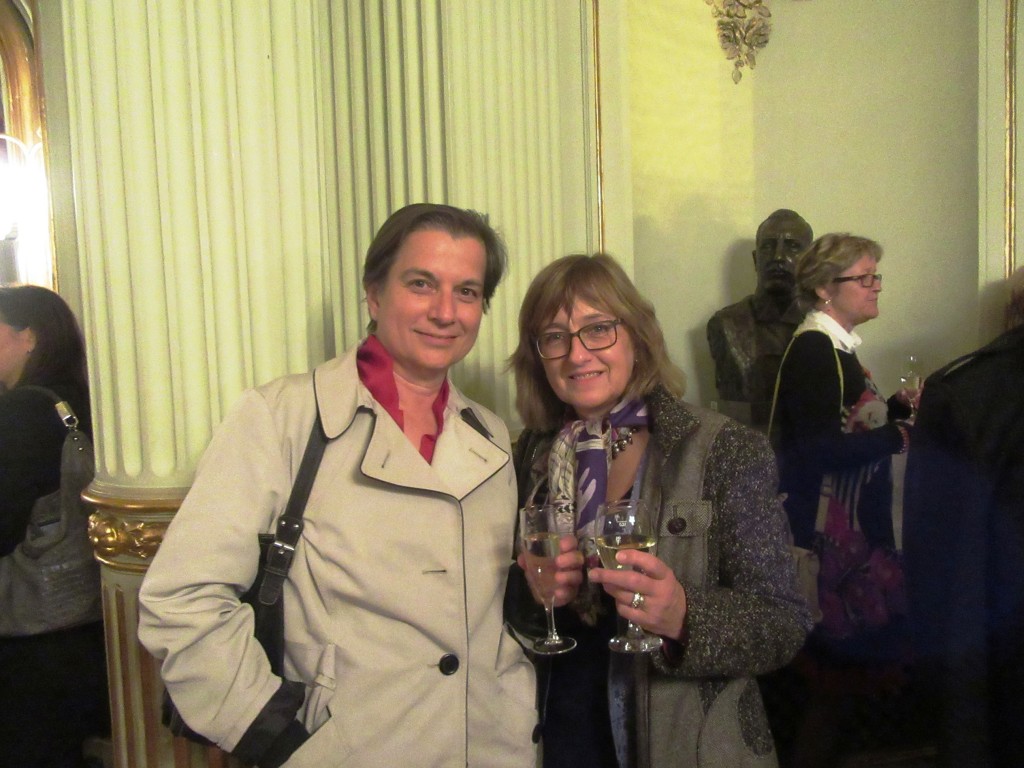 At the end of the performance there was a wonderful treat laid on for all of us opera-goers – those from the gods as well as from the stalls. Wine and canapés awaited us in the foyer, while the cast mixed with the audience in a most delightfully relaxed and approachable way. Well done Linda for finding us a premier to attend. I’m certain you don’t get this kind of treatment normally!

On Sunday, Linda’s friend and professional tour guide Marina joined us for a trip to nearby Samobor. Marina was the brave soul who had shepherded our group of summer course students around Orebić and Pelješac last summer and it was lovely to see her again. She knew the best place to eat in Samobor and a pleasant place afterwards to walk off our lunch and soak up the sunshine of the last decent afternoon before, like here, the clocks changed and rubbed in the fact that winter is on its way. On returning to Zagreb, Marina took me on a tour of Zagreb showing me all sorts of interesting little nooks and crannies, of which I had hitherto been completely unaware. With the increasing popularity of Zagreb as a tourist destination, new interesting little plaques have been popping up around the city. Some mark spots of archaeological and cultural interest ‘before Zagreb was Zagreb’. A model of the city has appeared near Jelačić Square and was being pored over by a group of earnest visitors from South Korea. Apparently Zagreb has been featuring in a television series there, which has created a demand to come and visit Zagreb for real. The most intriguing of all was a sculpture Marina showed me of a grounded sun – a large round golden globe sculpted by Ivan Kožarić in 1971 and currently located in Bogovićeva near Cvjetni Trg. It wasn’t so much the sculpture itself that was so fascinating as the fact that more recently its inner planets (Mercury, Venus, Earth and Mars) had been added to it in various places around the city centre, with the outer planets further afield – each one proportionate to the mother sun in terms of distance and size. This gave rise to a game that Marina set up of ‘spot the planet’.   The only clue she gave me was the different streets in which they were situated. It was my job to locate the wall-mounted plaques with little brass globes of varying sizes mounted on them. It was quite sobering to see that, in this context, Earth was reduced to the size of a malteser! Except, of course, maltesers are manufactured by Mars! And let me point out that all of this fun and games was being conducted in – yes, you have guessed it – Croatian!! 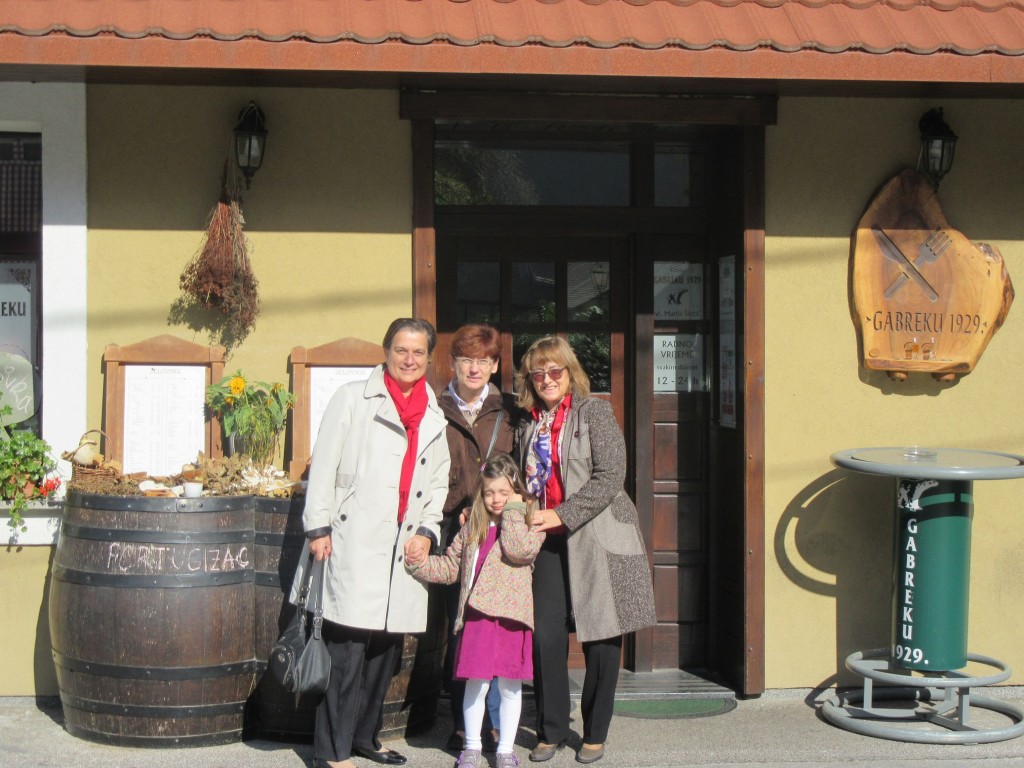 On Monday, Linda and I set off for Plitvice Lakes. We had previously visited them in the springtime some years ago and they were wonderful. But on a sunny autumn afternoon, when the trees were decked in their gorgeous autumn cloaks, they were divine. How lucky were we that, not only was the sun shining in late October, but also that a special entrance rate was in operation due to the lateness in the season.   For 25 kunas each, we enjoyed several hours of wandering around the lakes, through the golden woodland and past thundering waterfalls, marvelling as each new vista revealed itself. We took a road train up to the higher lakes and a boat across one of the lower lakes, traversed bodies of water on boardwalks and took innumerable photos of the glorious colours and cascades. All too soon, the sun set on the first afternoon of Croatian wintertime – or whatever they call their equivalent of GMT +1 – and we had to hasten to catch the last road train back to base before the light faded completely. It was a magical afternoon never to be forgotten.

In between all of these, we had found time to start planning for next summer’s immersion course in Zadar, a thought to ponder on during the winter months ahead. On Tuesday morning, Linda had getting to the airport down to a fine art, which meant we sped through departures and were back in London in no time at all – except that by then who knows what time it actually was. In three days I had moved from British summertime to Croatian summertime to Croatian wintertime to GMT and was thoroughly confused – but in the nicest possible way. What a wonderful weekend to set me up for the rigours of winter ahead. And, what a brilliant way to reinvigorate me for more adventures into the Croatian language and all of its foibles and frustrations. And I am loving every minute of it! Thank you Linda for making it all possible and for a truly magical weekend. 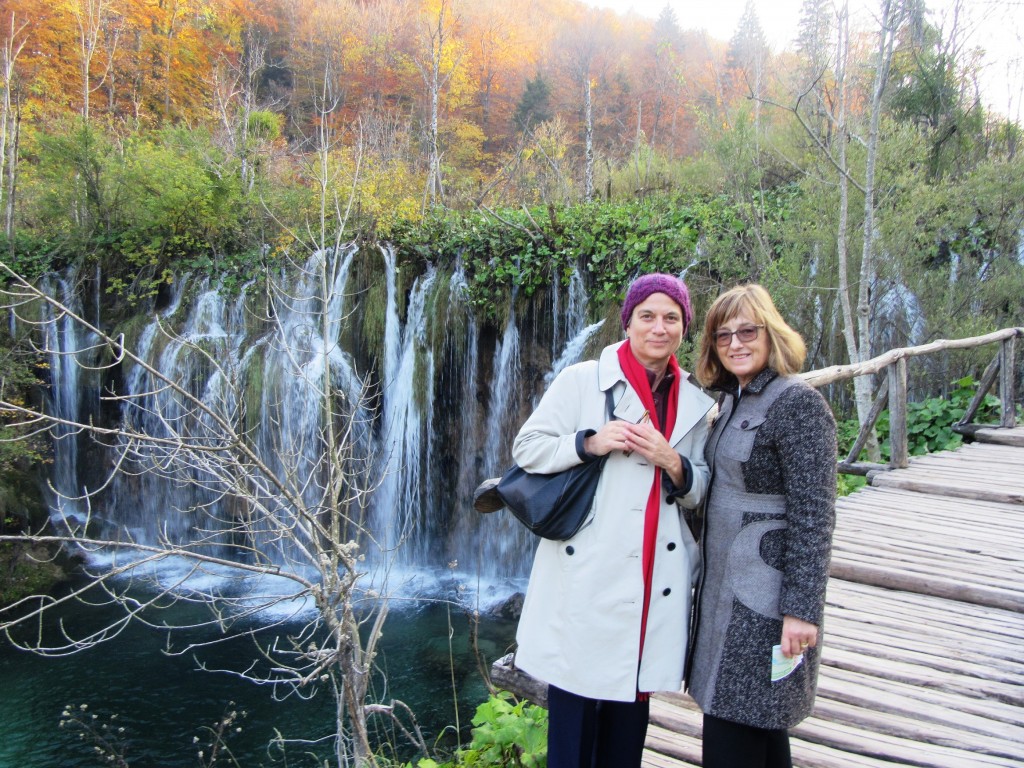