Island Life On Vis, Croatia: An Interview With Senko Karuza

Senko Karuza was born in Split and raised on the island of Vis. He studied Philosophy at the Faculty of Humanities and Social Science in Zagreb and is an esteemed writer, perhaps best known for his studies and short stories of island life. He also has a very special konoba [rustic family restaurant] in a small bay, on the island of Vis.  Eating here is more of an experience than a meal and you’ll be led by Senko on what to eat and when to eat it. If you’re happy to go with Senko’s flow then you can be assured of a unique, intrinsically local experience, sampling the freshest of fish and other produce, cooked in classic Dalmatian style and served at a leisurely pace which allows you to swim, chat or explore between courses. Below, Senko reveals a little more about his life and work. Many thanks also to Sanjin Vrbanus © Studio Vrbanus, for the photos of Vis. 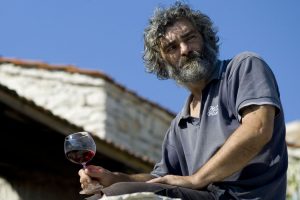 1. Do you live all year round on Vis and can you tell us a little about how your life as a restaurant owner fits in with your work as an author?

The restaurant opened in 1989, when the island was demilitarized and opened up to foreigners. Until then, Vis was a military base and could only be visited by domestic tourists. Initially, the idea was to organise a place where people could be educated and share their island experiences thereby improving their life on the island, preserving its values ​​and turning it into a pleasant place to live. It was a time when young people were leaving the island en masse and donating their knowledge acquired at school to the cities. During those and the immediate post-war years it was a place where I organized many workshops, such as a workshop for making bread in traditional bread ovens, as well as the use and utilization of waste, particularly plastic, art installations from debris made by renowned artists from many countries, and poetry and literary evenings that are still 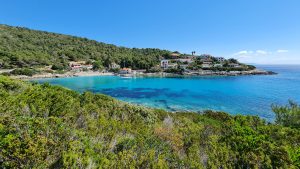 held today. I paid special attention to the preservation of authentic island dishes and the production of completely pure organic products and groceries. The idea, therefore, was not to pander to the guest, but to persuade him to consume indigenous products and thus draw him into a more complete experience of the island. Of course, such a dynamic does not allow the necessary amount of time for literary creation, so I realize this second part of myself out of the season, mostly in winter.

2. Of all your publications, which one are you most proud of and why?

I love each of my books in their own way and I would not single out any one of them. They are of different character and therefore incomparable, some talk about completely urban, city life and it is an atmosphere that I also live intensely because I did not break ties with friends and cities where I lived, and I am an active member in the publication of two magazines, the SEA, which deals with the topic of navigation and the culture of life at sea, and THEMES, a literary magazine of the Book Centre in Zagreb.

3. Are any of your books available in the English Language?

Individual stories have been published in English in several journals, and a special edition of Relations has published a complete book in English containing a selection of stories from all my books published so far. The stories were translated by Tomislav Kuzmanović and published by the Croatian Writers’ Association. 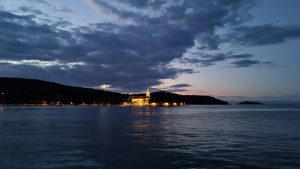 4. What are your favourite parts of island life?

The slow pace of life away from the city noise, which, when well organized, brings many benefits and plenty of free time for communing with nature, travelling and quality socialising, as well as the possibility of direct engagement in agriculture and fishing.

5. Could you give us an idea of a typical menu at Konoba Senko Karuza and your idea of who might make the perfect guest at your restaurant?

The guests in my restaurant are mostly people who are open to island cuisine and are ready to consume organic and simple food that is associated with the island’s tradition. So you can eat brudet, perhaps the most famous traditional island dish, or blue fish prepared in the old fashioned way, dried sea cat soup and barbecued sardines, all served with capers, rock samphire, shallots and olives which we have grown ourselves. We can also treat them to two types of indigenous wines, Vugava and Plavac, which we have also produced ourselves. 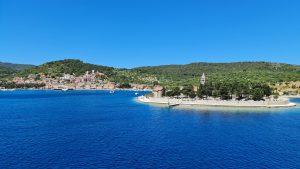 6. How would you sum up the style and ambience of your restaurant in three Croatian words?

7. What does the future hold?

Without regard to the continuity of work in my own restaurant, I hope even more that this style of work will be recognized and continue to develop in many other places, keeping in mind the preservation of nature, sustainability, tradition and departure from the global monotonous tourism.

8. Where can we find out more?

I am not active on social networks, but a lot can be found about my books on the pages of my publishers and on cultural sites which promote literary creation.