Croatian Language SchoolnewsletterLIKE A BAT OUT OF HELL – BACKWARDS!

There was quite a gathering of CLS students in Zagreb on the last weekend of October.   It just so happened that we had all converged at the same time from all directions for our own particular reasons, my excuse being that I was there to start planning with Linda our summer school for June 2017 in Istria.  Landing in the beautiful sunshine of a golden autumn day, Zagreb really is beginning to feel like a second home to me.   Quickly dropping off my suitcase, I made straight for town and, in true Zagreb tradition, met up with two of my fellow student friends ‘ispod sata’ on Trg Bana Jelačića, whence we set off in search of lunch and a good catch up.  Several hours and a lot of chatting later, lunch transitioned into dinner, by which time Linda had arrived from Lošinj with another student in tow.    The venue for our dinner was the trendy Carpaccio Restaurant, the walls of which are decked with a style of pictures and prints that made you feel you could almost be in Paris. Seven of us, including Linda and her friend and qualified tour guide Marina, made the most of a highly convivial evening and it was the early hours by the time we all said our goodbyes. 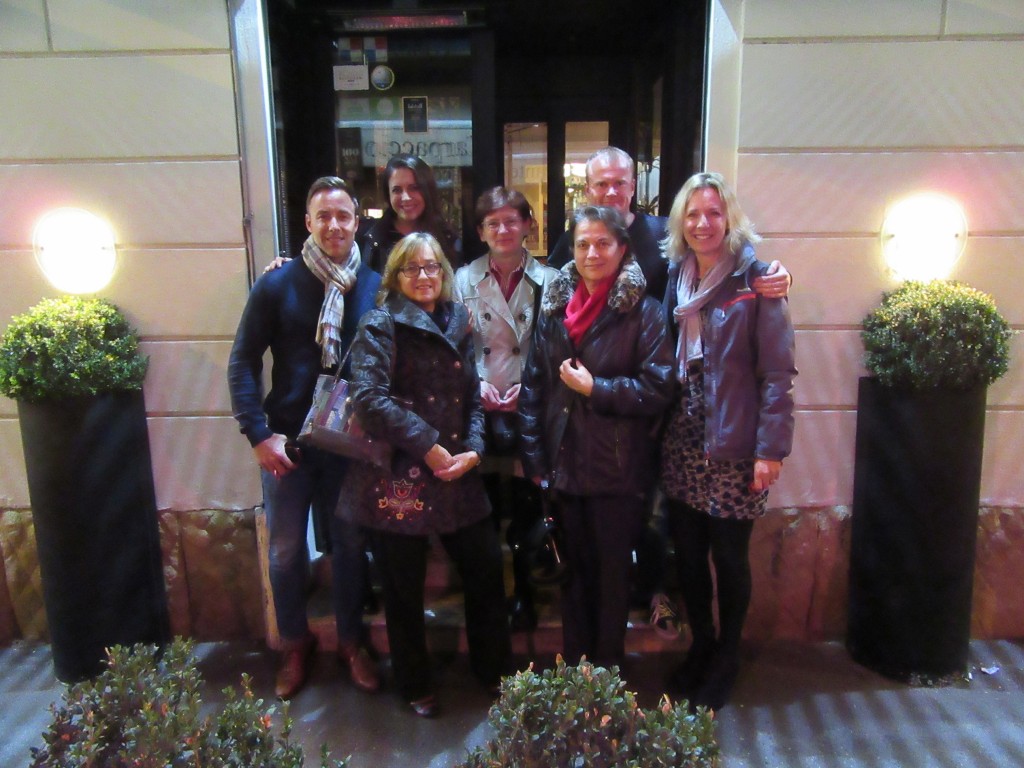 Sunday again dawned brilliant and sunny and we had had the advantage of an extra hour in bed due to the fact that the clocks changed this weekend.  Nevertheless, with all the exertions of the previous day, a knee injury of mine decided to flare up and render me practically lame.  It was a good job that our programme for that day was gentler but I knew I needed to try and get up strength for Monday, when Linda had all sorts of plans involving Marina and me.   And so Monday dawned and off the three of us set on what unexpectedly turned out to be a possible first step towards the planning of the 2018 CLS summer school! As we sped out of Zagreb, the ever vigilant Marina remembered to point out to me in an underpass in Gaynice that we were just passing Pluto!  Last year she had shown me representations of the Sun and the inner planets of Mercury, Venus, Earth and Mars that are strategically and proportionately located throughout central Zagreb.  At the time I had asked her about the outer planets and now she had located one of them for me.  That just leaves Jupiter, Saturn, Uranus and Neptune for another day and another visit!

Our ultimate destination was the Castle of Trakošćan but we got somewhat blown off course on the way when we stopped for what was meant to be a quick lunch.  Marina knows all the best places in Zagorje and, not only did our lunch stop offer the most delicious regional food but, with its location and facilities, it suddenly opened up all sorts of possibilities for our next but one summer school.  Thus we stayed there a lot longer than planned, as Ljubica, our host, showed us round and elaborated on the possibilities.    When we left we were not only full of wonderful food, including the most delicious juha od štrukli, but also of food for thought, which we will explore further over the coming months. 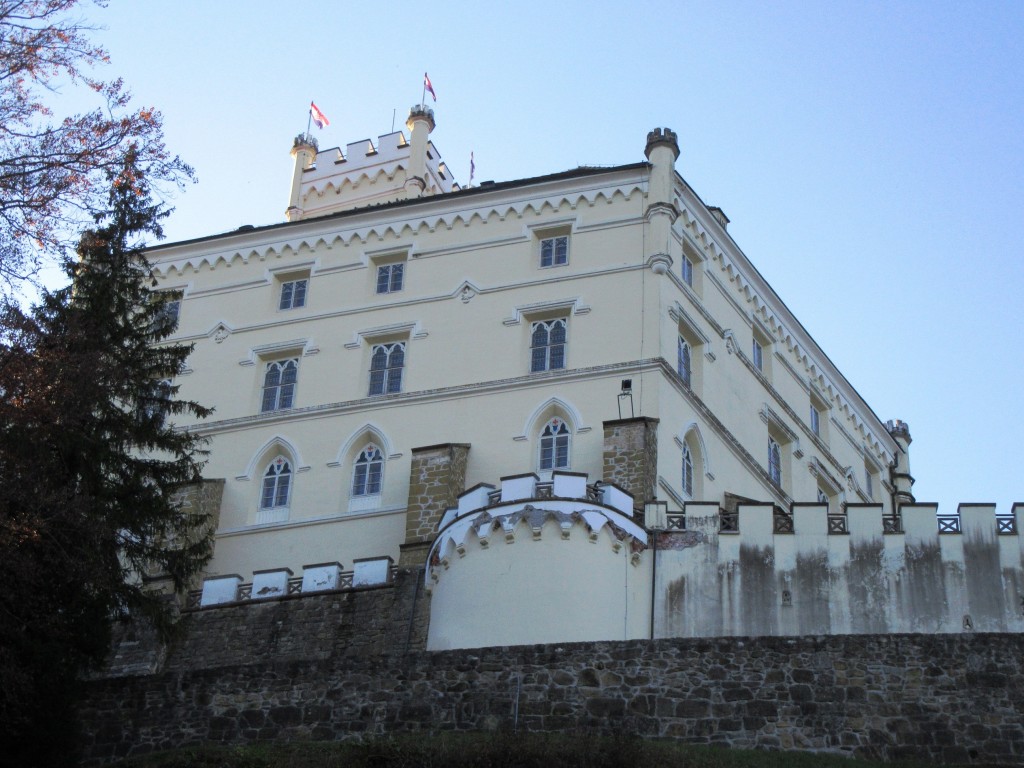 Finally arriving at Trakošćan, I looked up in wonder and trepidation at the impressive castle perched high above us.  How exactly I was going to get up to it I wasn’t sure but I was determined to try.  Given the time of our arrival and the early onset of evening with the time change, we knew we would have to confine our visit to the exterior of the castle but this would surely become one of our excursions on our now fast developing plans for 2018.  I proceeded gingerly along the path above the lake and up the steps leading to the mock-defensive gates and onwards to the ramparts.  It was another golden afternoon with a vivid blue sky and the views all around were breath-taking.  When we were once again ready to descend, the real challenge set in for me as my knee would only allow me to descend the steps backwards!  This required quite of feat of balance and trust while Linda and Marina looked on with a mixture of concern and hysteria.  Once again safely back at the bottom of the steps we all agreed that this would definitely not have been an exploit to perform once darkness had begun to fall!

My final full day in Zagreb happened to be All Saints’ Day, November 1st.  Mercifully I had managed to escape the confection of Halloween at home last night but here Svi Sveti is an altogether much more serious and meaningful day of celebration and a national holiday.   It seemed that the whole of Zagreb was on the move in a steady progression past the Cathedral and onwards up the hill towards Miragoj Cemetery.  Locals seemed to have been joined by a fair sprinkling of tourists, with even one or two selfie sticks in evidence! 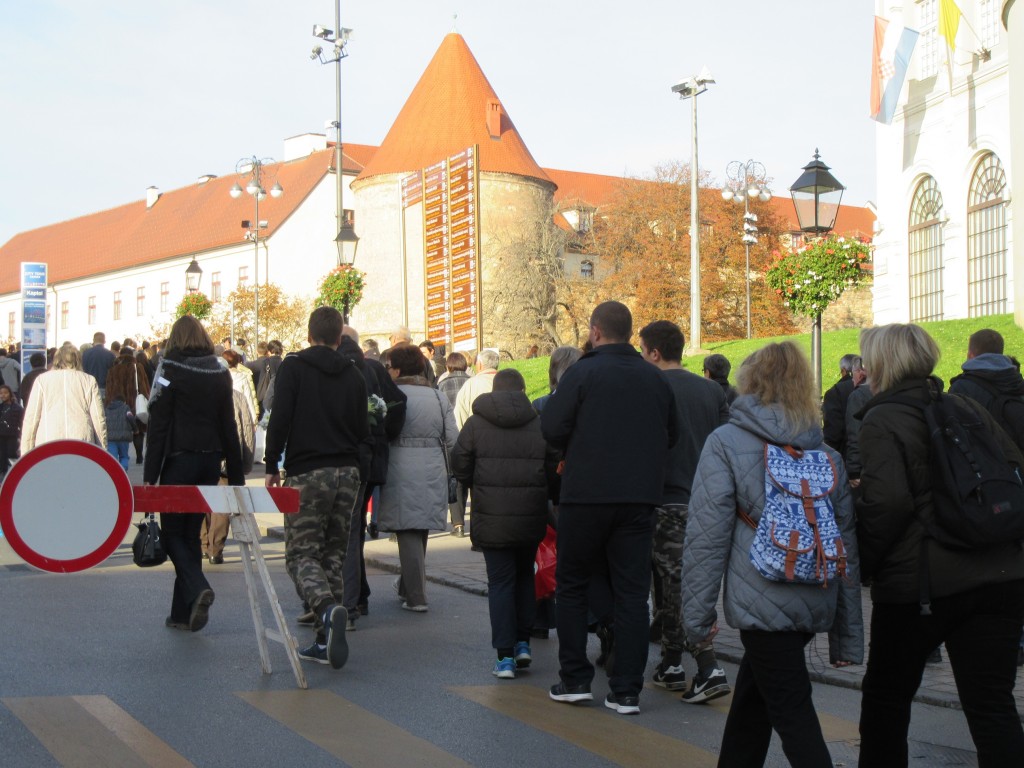 We have been so blessed with the weather and the entrance to Miragoj was looking magnificent, decked in all shades of red and golden autumn foliage set off against the blue sky.  We wandered slowly along the pathways, looking at all the beautiful flowers that the visitors had been bringing all day to deposit on the graves of their departed loved ones and stopping now and again to ponder over a name or an inscription.  Here Croatian, Serbian, Bosnian and Jewish names lay side by side in what would normally be the peace and tranquillity of this huge and impressive cemetery.  We lit candles and thought of our own families and felt a part of this great procession of people, which would apparently continue unabated right through the rest of the day and well into the hours of darkness.  The final visitors would still be walking around this spiritual place by candlelight at midnight. 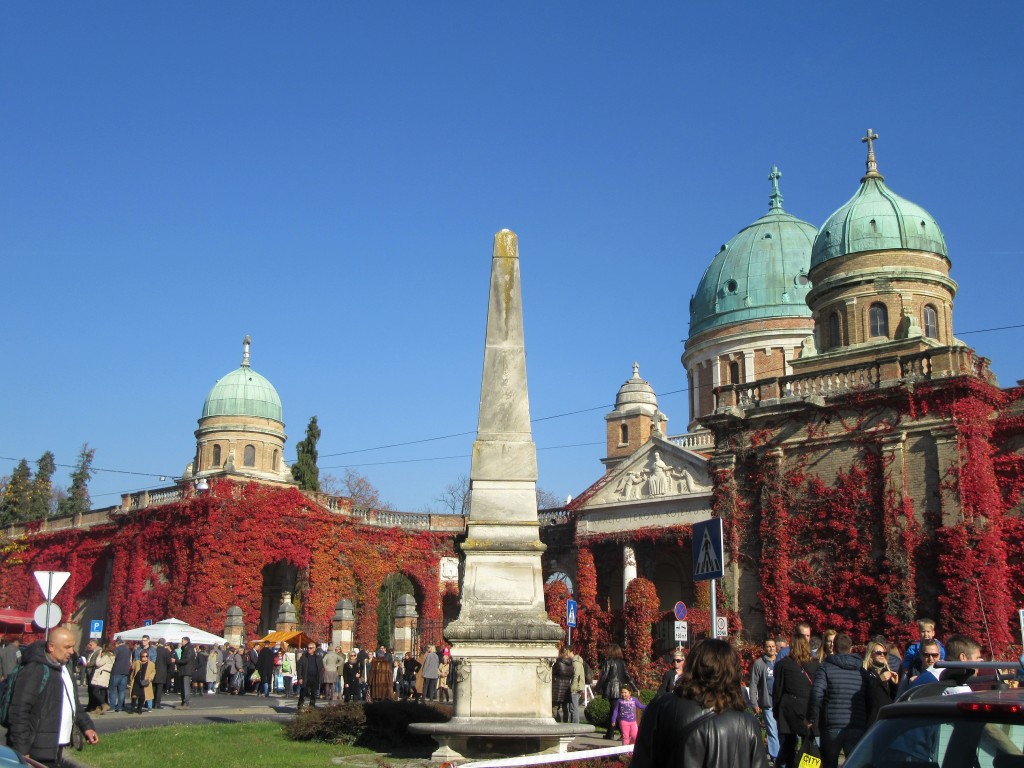 And so my latest Zagreb adventure has drawn to a close.  Linda has performed miracles, keeping all of her skype students happy while finding time to go out and about and set the wheels in motion not only for next year’s summer school in Istria but also very possibly the one after in Zagorje.  Our planning for Istria has taken several leaps forward and we now have our school location sourced and booked in the small town of Fažana, close to the Brijuni Islands on the southern tip of Istria.  Our excursion plans are also well advanced and it promises to be another memorable trip for those who choose to join us.   As I told her, she has done a very good impression of going round like a bat out of hell (I love to teach her some of our more colourful English expressions) while I have been perfecting the art of negotiating steps backwards!  Between us, we conjure up quite an interesting picture don’t you think! 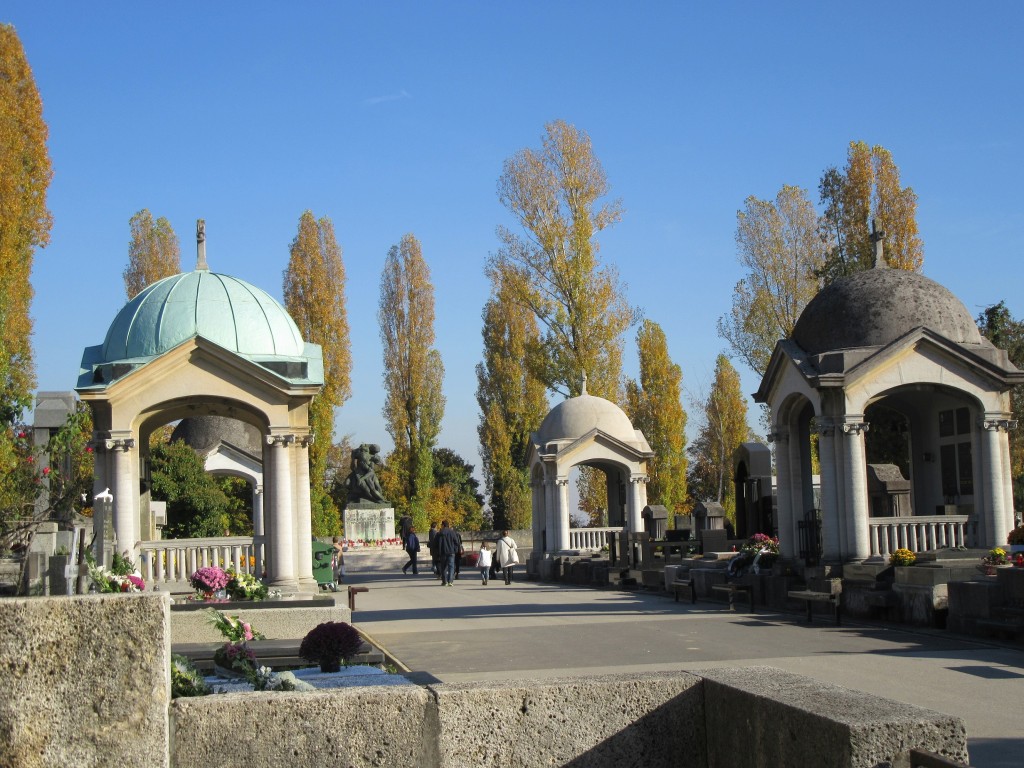 As ever, thank you so much to Linda and to Marina.  I go home with lots of lovely memories to get me through the coming winter months. 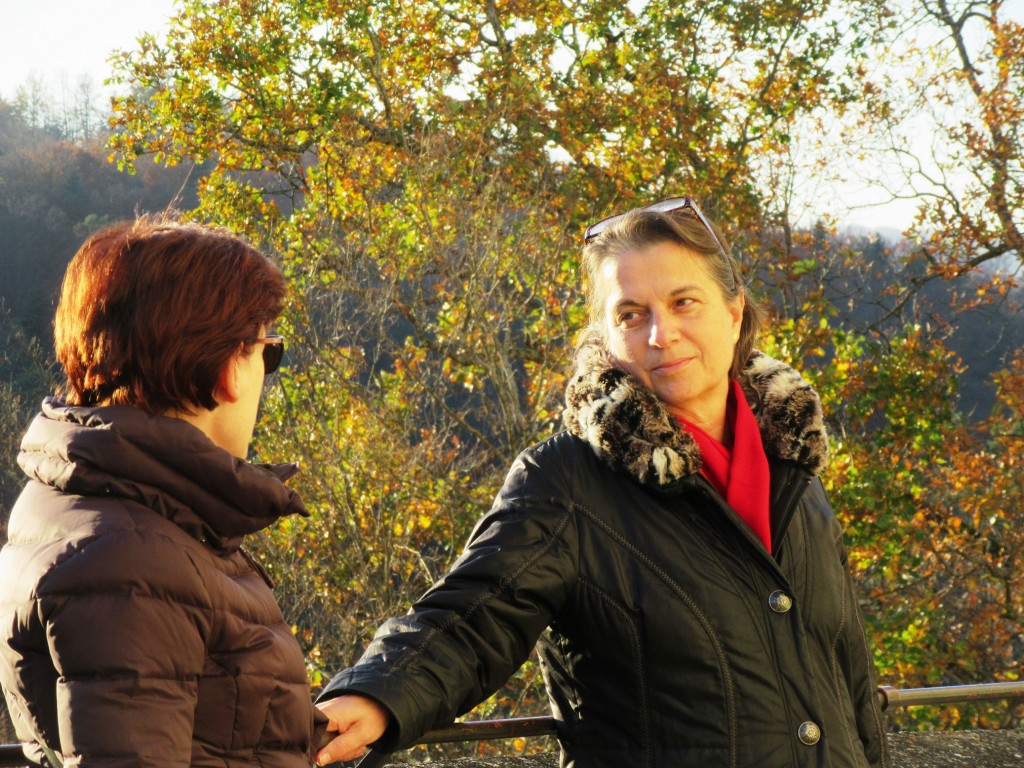