Nataša Stanić Mann works in the field of movement theatre and visual arts using a blend of different disciplines. She has an Acting Diploma from ARTTS International in North Yorkshire and graduated from the International School of Corporeal Mime and Physical Theatre in London. Nataša is the founder of Studio Lila and the Festival of Visual Theatre, Labin, in Istria, Croatia, and has recently exhibited her video installation – Time of Stillness – at Worldly, Wicked and Wise Gallery in Queens Park, London. Most recently, her solo performance, The Return, has been live streamed at The Cockpit Theatre and, before that, was showcased at The Cockpit as part of The Camden Fringe, and Lewes Festival of Solo Theatre. If you’re quick you can catch the recording which is available until 25th February 2021 – see the link at the end. In this interview she reveals  the twists and turns of her life and career.

1. Could you give us a little personal background please.

I come from a small town in Western Croatia called Labin. Labin was very well known in ex-Yugoslavia for its strong industrial output and for its large coal mine. Labin is located on the east coast of Istria right next to Rabac, a popular tourist destination. I came to the UK to study acting in the late nineties, then went back to Croatia and returned again to the UK to specialise in physical theatre. After that I was living in between the two countries for a few years until I finally settled down here in the UK. So, like most immigrants, I feel like I have two homes. Having said that I believe I will be living here for the foreseeable future.

2. Have you always wanted to work in theatre and how did you end up with your unique blend of styles and experience?

Yes, I always wanted to work in the theatre. When I was growing up it was very difficult to get into the theatre because there was only one drama school (Academy for Performing Arts) in each of the ex-Yugoslavian Republics and they had a monopoly on the performing arts industry. It wasn’t easy to get into those Academies, and you didn’t have any other way to access performing arts education, so I ended up studying Sociology instead and, once things started opening up in Croatia, I attended various performing arts workshops. Finally, I took a big leap in my late twenties and came over here to fully immerse myself into what I always knew I enjoyed the most. I’m attracted to the kind of theatre and arts that mix different styles and forms of expression; I like to experiment with this in my work.

3. Of the various roles you have undertaken in the Theatre Industry – performer, director, producer, etc – which do you enjoy most?

I think I have always done producing out of necessity – to enable my creative work to be put on, although I do enjoy producing as well and it can be a very creative role. However, creating shows is what I love and get the most fulfilment and joy from. I haven’t done that much directing professionally, I mostly directed myself in my work, but it is something I feel I will be going into much more in the future. 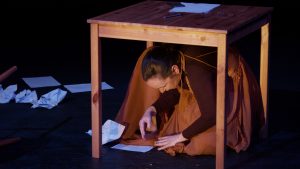 4. Your production, “The Return”, is highly auto-biographical – about growing up in Croatia, the Homeland War, leaving Croatia and then going back. Was it difficult to write and perform, or perhaps cathartic to work through some clearly challenging experiences and conflicts?

Both – it can feel quite exposing to bring something so personal in front of the audience, but creating this piece felt very therapeutic at times.

5. Have any of your family or childhood friends seen The Return and, if so, what kind of feedback have you had?

My mother and sister have both seen it although, my mum doesn’t speak English so she couldn’t understand everything – which I was relieved about. I think everyone has their own perspective and truth about family events and history. My sister said that this is not how she remembered things but that she respected I might have experienced it differently. 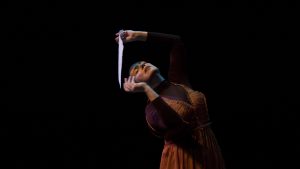 6. The credits of The Return suggest an international collaboration – how does that work in reality? How does it all come together, especially in a pandemic when it’s more difficult to collaborate?

The piece was conceived in a workshop I took a couple of years ago ‘Making Theatre as a Solo Performer”. I went on writing and developing it from there. I had sessions with Filomena Campus and Andres Velasquez during this process as ‘outside eyes’ and they helped devising the show. Valentino Nioi, who I collaborated with previously on the ‘Time of Stillness’, composed some of the sound for the show. At a later phase, a brilliant lighting designer, Josephine Tremelling, and a costume designer, Emily Harwood, came on board. Work on the show has intensified since the project was awarded a grant from Arts Council England. The last two weeks before the show most of the collaboration was done over Zoom. I was rehearsing in the studio, being observed, and directed through Zoom. On the day of the live stream only a lighting designer and I were in the theatre apart from the Broadcasting team. This was a truly unique experience and what a great opportunity offered by The Cockpit theatre to enable artists to keep creating and producing a show despite the pandemic. I do hope, however, that the next show will be in front of a live audience.

7. Could you tell us a little about your work in Croatia; would you contemplate showing The Return there and are there many Croatian writers or playwrights that tackle the sensitive subject of the Homeland War for the home audience?

I’d love to bring the piece to Croatia if the opportunity presents itself. I would have to think about the text and whether it would make sense to translate it into Croatian and maybe recite a famous poem by Dobriša Cesarić in English instead. I think a lot has been written and shown on the theme of the Croatian War of Independence. For me, I’m interested in the subtle consequences of this war and a war in general. I was in denial for a long time about how much indirectly experiencing this war influenced me and formed my identity. I do feel that there is still a long way to go in healing ourselves as a nation from that experience. In a way it is easier to be proud of the independence Croatia gained through this war, than it is to feel deep pain and a loss. 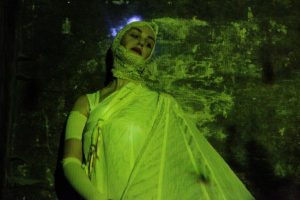 8. What are the challenges and practicalities of writing a piece like this mostly in English? Did you start in Croatian and then translate or did you go straight into English?

I wrote it straight in English. It was then corrected, and proof edited. I spent lots of my adult life in the UK and all my Performing Arts education was in English, so writing in English comes naturally to me, even though it’s not perfect!

9. Many of our students say what a difficult language Croatian is – was it difficult for you to learn to speak English so fluently and use it in your work.

I started learning English when I was about 10 years old as a part of the school curriculum. But I only became really fluent once I came to study in the UK. That probably goes for any foreign language – you need to spend some time in the country to start absorbing the language properly. I use both English and Croatian in the show, but you don’t need to be able to understand Croatian to watch the show. It is a very visual piece, and the idea is to be able to immerse yourself in it even though some parts are in the language you might not understand.

10. What is next for you? For example might there be a sequel to The Return amongst your projects, and will you visit Croatia more often, once travel restrictions are lifted?

Yes, I’m looking forward to developing The Return further and bringing it to live audiences. The ACE grant means we will be able to keep working on the piece and I’m really excited about that. It would be wonderful to be able to play it for longer and to tour it. I normally go to Croatia twice a year, and I managed to go twice last year. There is still a chance and I’m hopeful to keep that quota going this year too.

It is possible to access more information about my previous work if you google my name [note that Nataša often uses the phonetic English version of her name – Natasha]. My website is: www.natashastanicmann.com where you can watch clips of my previous work. And here are the links to my social media:

And to watch The Return, follow this link: https://www.thecockpit.org.uk/show/the_return_0