After our sortie inland for this year’s summer school, next year – 20th to 27th June 2020 – we will be returning to the beautiful Adriatic coast and have chosen for our base the small Kvarner town of Lovran with its charming villas, built at the beginning of the 1900s, one of which we have selected as our school home. 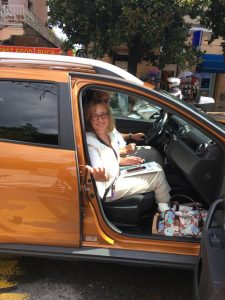 Early on the morning of Monday 9th September John and I convened at Stansted Airport and it was still only mid-morning by the time we met up with Linda, who had just arrived in Lovran on the bus from Zagreb.  Also in our research group this year were Sarah and Leo, who live in the area and so could add their local knowledge to the mix.  By lunchtime, Linda, Sarah, John and I were all happily installed on the terrace of one of Sarah’s recommended restaurants Najade looking out over a sparkling blue sea and cloudless sky.  In the weeks preceding our visit, we had all been exchanging endless messages about possible accommodation, contacts, excursions and activities and now here we all were together ready for the real work to begin.

The reason for choosing the Kvarner area for our 2020 summer school is that its main city Rijeka has been chosen as European City of Culture for next year and one of our full day excursions will concentrate on getting to know the city.  However, we had already decided that we should choose a quieter and calmer place for our school home and, having checked out some of the alternatives such as nearby Opatija and the small holiday resort of Mošćenička Draga further along the coast, Lovran came out as our location of choice.

After lunch and a walk around the town, we had already discounted an early contender in the accommodation stakes, which we had provisionally reserved some weeks ago, as being too far from the centre, too modern and cheek by jowl with the huge new Plodine supermarket.  That one would have to go and the search would start again.  We then went to check into the apartment we had booked for our stay, which was in one of the traditional villas situated close to the sea, the old town and all the amenities of Lovran.  We had only been there a few minutes, when Linda announced that she had been in this apartment once before about ten years ago, which was a bizarre coincidence as she had had nothing to do with the reservation for our stay.  As we settled into our spacious bedrooms and comfy surroundings, we all felt very much at home and, as we sat on the terrace drinking tea, we all agreed it would make a very suitable location for one of our class groups – but more of that later.  Meanwhile we had to hurry off to meet Sarah again and start our search for accommodation, which covered various villas and small hotels both in Lovran and Mošćenička Draga.  Some of them we could only view from outside while one or two allowed us to look round inside but one by one we eliminated them as being unsuitable either in themselves or because of their location.  It was a slightly dispiriting undertaking but valuable nevertheless as it further confirmed in our minds that central Lovran was definitely the right spot for our summer school home. 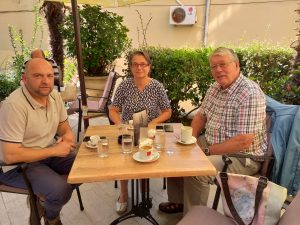 The following day our work started in earnest.  Firstly Drago, the owner of our flat, paid a visit and from him we learned that the apartment upstairs was also available for short term bookings and that he was friends with the owner and could arrange for us to meet him.  Then it was off to meet Goran, who with luck would be our transport and logistics expert for the week.  After a very productive talk with him over a morning cup of coffee in the Gradska Kavana, it was off to search for locations for our yoga sessions.  Remembering how lovely it had 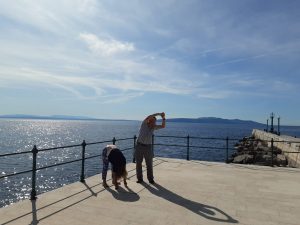 been to practise our yoga by the sea’s edge in Suđurađ in 2018, we set off to see if we could find a similar spot in Lovran.  Along the lungomare coastal walk there were several contenders and we selected a front runner which we felt would fit the bill very nicely.  After that on Sarah’s recommendation we had a meeting with the owner of Villa Astra, one of the very smart small villa hotels right on the sea front.  This one was going to be expensive but oh was it beautiful!  With its own gardens and pool, it would have accommodated all of our needs and some.  When he offered us a generous discount, it was still…expensive but it was worth investigating further and we emailed our past students for their input. 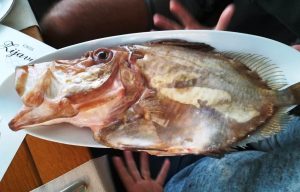 Then it was into the car for a visit to Opatija and a small hotel complex beyond there on the way to Rijeka, which was also owned by Drago and which he had recommended we should check out.  Sarah was not at all encouraging about this suggestion but nevertheless we went to take a look for ourselves and on seeing it had to agree with her.  However lovely the photos of the rooms that Drago had shown us, the external area was neither attractive nor convenient and the building itself looked like an office block.  So another thumbs down but all useful research. 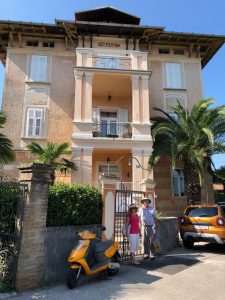 The reconnaissance in the evening was to be at one of Sarah’s recommended restaurants, Zijavica in Mošćenička Draga, which specialises in freshly caught fish and scampi.  Joined by another of Linda’s students, Michele, and his wife Sonja, we spent a very jolly evening right beside the beach enjoying the delicious fresh fish washed down with fine wine.  Definitely one for next year’s summer school, although we will have to keep an eye on the costs and settle for the house wine I think!

On Wednesday we continued with our general familiarisation of Lovran and looked at a few more villas in the central area.  We also had our promised meeting with Zoran, the owner of the apartment above ours, and all of a sudden our school home problem seemed to be resolved.  With only a few responses from our students about the all singing all dancing option from yesterday, here we were standing in what appeared to present the missing piece for our accommodation jigsaw.  Put this apartment together with our one downstairs and Bob’s your uncle, we had everything we needed in the right part of town at a very good price.  Job done!   This called for a celebration and we rewarded ourselves with lunch on the terrace of Najade followed by a snooze and a swim in the crystal clear waters just nearby – all in the name of research, of course.  And we certainly gave it the thumbs up.  The water was cool enough to make you feel refreshed and invigorated without chilling you and there were plenty of little fish swimming about, which was 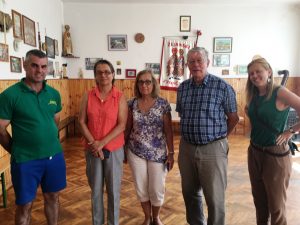 very encouraging from the point of view of the cleanliness of the water.  Further research in the evening with Leo and Sarah took the form of checking out one of their recommended restaurants in the old town Ganeum. Another success.  Another one for the list for next June.  Things are really taking shape and tomorrow we will be doing some work on the excursions.

And so we did.  Having confirmed to both Drago and Zoran that we wished to book their apartments for next June, we cancelled our option on the first villa we had booked and advised the owner of the Villa Astra that we would not be proceeding.   We comforted ourselves with the fact that our chosen location was far more 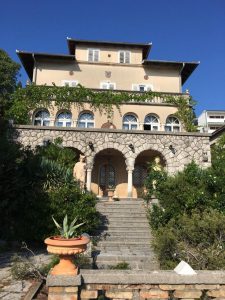 central than the Villa Astra and in all honesty it probably is far more suitable for our needs.   Then it was off in the direction of Ćićarija, a small settlement in the Učka nature park, whose inhabitants, although quite integrated into the local community, have their own language and culture and are believed to originate from Romania. Here we had arranged for a meeting with their delightfully named head honcho Elvis.  Is this where he has been hiding for the past forty years we wondered – but no!  This Elvis would only have been a little boy then but we suspect from what he said that his mum might have been a fan.  Having had a very constructive talk with him, the outline of a visit was agreed and then we were onwards to Rijeka itself.  After a brief stop to check out the Trsat area of the city and the castle, it was on to the Villa Ružić for an absolutely fascinating visit hosted by Theo, an art historian who lives there with his 95 year old grandma.  He told us all about the family who used to live there, of which I believe he may be a descendant but we will find out more 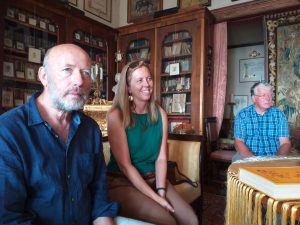 in June.  Certainly he knew every inch of the place and told us stories and showed us old books as we sat in the lounge surrounded by family furniture and ornaments, china and glass and a grand piano.  It was an unexpected and glorious highlight to our visit, which was now nearing its end but we have so much to look forward to when June finally comes around.

Our final dinner was back on the terrace by the sea in Lovran, at the restaurant Najade  , which by now had become a firm favourite and which I am sure we will all enjoy frequenting during our stay.  Then, after huge thanks to Sarah and Leo for all their suggestions and input, we took our leave of them and returned to our school home for an early night, as we all had to be up and on our way to our different destinations and back to real life at seven o’clock on Friday morning.  But for four days the sun had shone on us constantly as we had slowly and carefully assembled all the component parts of what we hope will be another super summer school.  We hope that you will be able to join us when June comes around again. 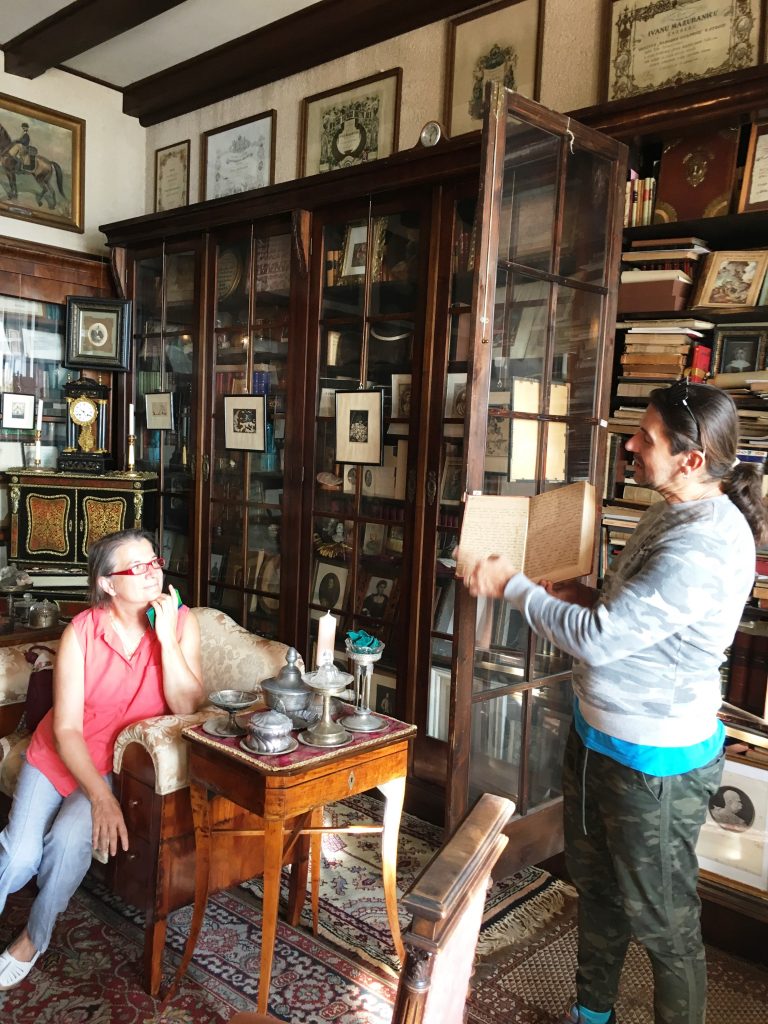 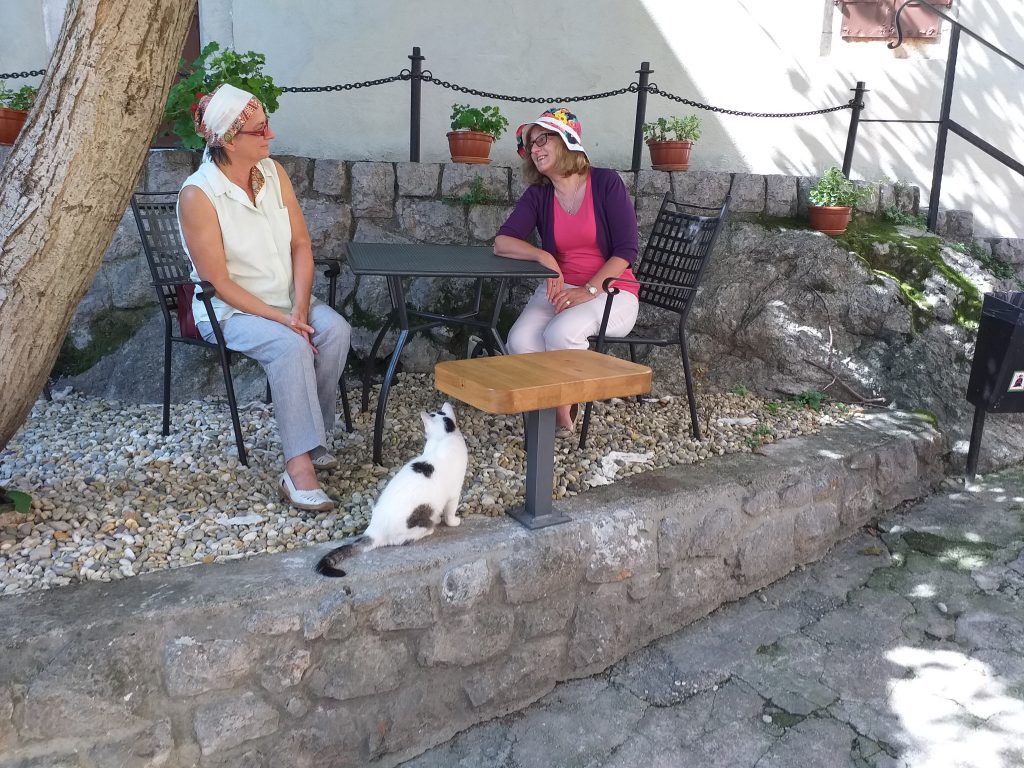 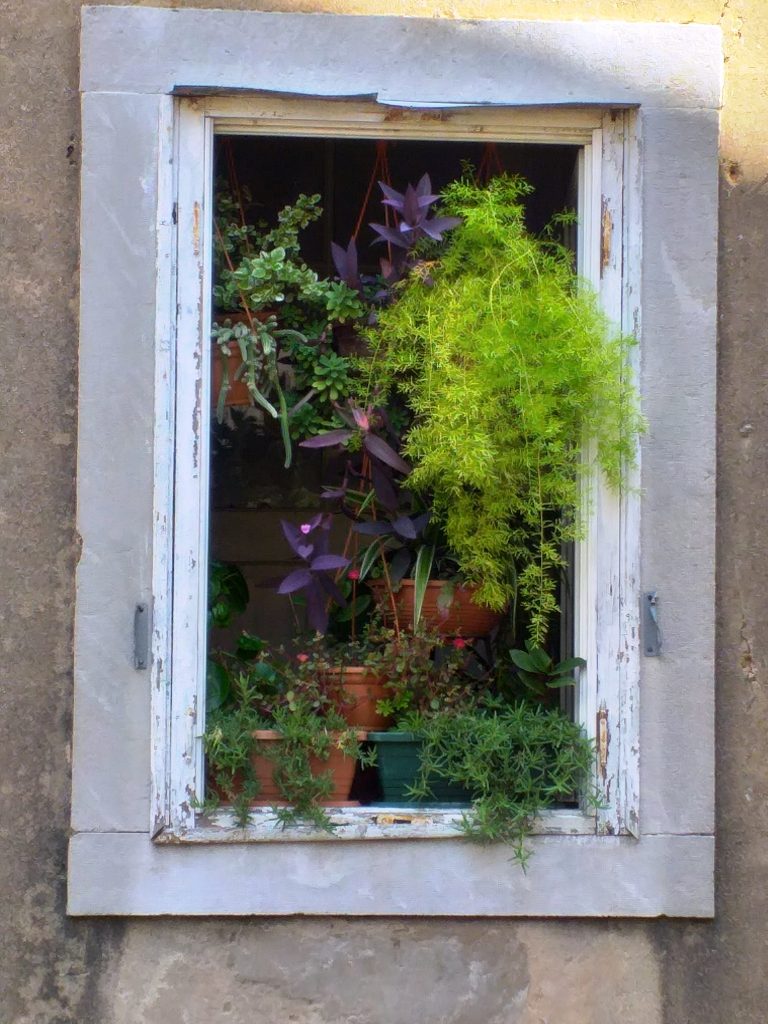