Since our programme of annual Language and Culture courses started back in 2013, our schools for the week have always been located somewhere along Croatia’s coastal strip.  For 2019 Linda decided that it really was about time we took a trip inland to discover ‘the other’ Croatia where, to date, many fewer visitors have ever ventured.  So, with this area in our sights, John and I arrived one Monday in the second half of September on the morning flight from Heathrow into Zagreb, where we were met by Linda hotfoot from Lošinj. 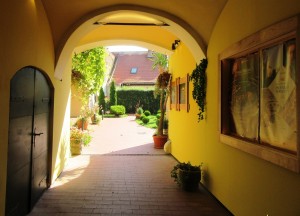 Linda had already been busy doing some research and had come up with a promising base in Osijek, Croatia’s fourth largest city.  Called Maksimilian, the old property situated within the fortified heart of Old Osijek has been lovingly restored into a warm and welcoming guest house set around a peaceful and flower-filled courtyard.  After a two hundred mile trip eastwards into the inland branch of Croatia, across the fertile and fruitful region of Slavonija along an enviably empty motorway, we arrived at our destination in the mid-afternoon sunshine and were immediately captivated. Pushing open the door off the cobbled street, we found ourselves in a tranquil little oasis and were greeted by a lady who plied us with tea and made us feel very welcome. 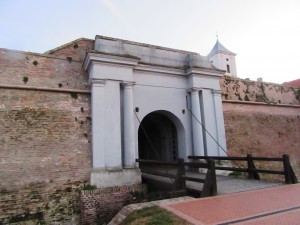 Having settled into our rooms, we set off to get a first impression of the old Tvrđa – the ancient core of Osijek.  Still partially surrounded by its old defensive walls, it has a calm and peaceful charm and we wandered along the cobbled streets and out through one of the old city gates towards the banks of the Drava River.  Locals were congregating in the bars and cafes located here and there on the streets and squares.  Now and again we passed one of the bakeries, which were liberally dotted around the place and appeared to be open well into the evening.  Kod Ruže, the restaurant where we decided to have dinner, seemed to be exclusively frequented by locals and was oozing with character and the meal they served up was enough to feed an entire football team.  At the end of the evening, 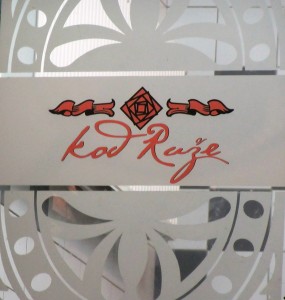 John requested a doggy bag and we were still working our way through the mountain of meat on our return journey to Zagreb two days later!

The following morning Linda had set up a meeting for us with the owners of Maksimilian, husband and wife team Jasmina and Vladimir. Vladimir can trace his family roots in Osijek way back over generations and, apart from an enforced spell in Slovakia as an evacuated schoolboy during the horrors of the Homeland War in the first half of the 1990s, he has lived here all of his life.  Some years ago he and Jasmina made the decision not to leave the city, as so many of the younger 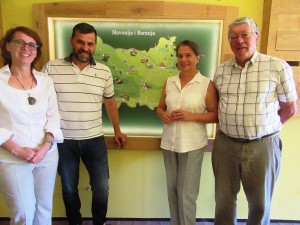 residents had, but to stay and try to make a contribution towards rebuilding Osijek and opening it up to visitors from the wider world.  Over a number of years they have painstakingly restored Maksimilian into the welcoming hostelry it is today and Vladimir is developing a parallel enterprise as a tour guide, so it seems as if we couldn’t have come to a better place.

After chatting about our plans for our visit next June, we left Jasmina to her primary focus of managing Maksimilian and set off with Vladimir to learn some more about Osijek and its history.  In the main square, he showed us the imposing structure of the Council offices, which is the building which features on the back of the 200 kuna note, 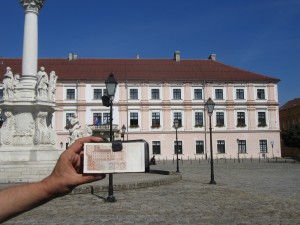 as well as a 1,000 year old ginkgo biloba tree with its characteristic fan-shaped leaves.  As we strolled across stretches of parkland, he showed us statues of two Nobel Peace prize winners, Vladimir Prelog and Lavoslav Ružička, who although not born in Osijek had both attended the local gymnasium, as indeed had our Vladimir himself.  As we wandered along one of the main roads in the Upper Town, 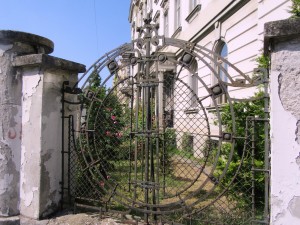 he showed us numerous examples of former residences of the successful townspeople of the eighteenth and early nineteenth centuries.  Built in the classic Habsburg style and with ornate railings and pretty gardens separating them from the pavements, many of these buildings had been subjected to subdivision into smaller domestic units in the Communist era and had subsequently suffered damage during the Homeland War.  Over recent years there has been a gradual process of regeneration, thanks in part to an injection of funds from the EU, and little by little the buildings are being restored to their former glory.

Vladimir pointed out the magnificent Art Nouveau Cinema Urania, which is still in operation predominantly as an Art House venue.  We paid a brief visit to the impressive neo-Gothic church, which strictly speaking doesn’t 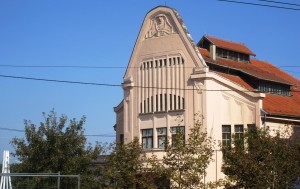 carry the designation of Cathedral because it lacks a bishop but for all the world looks as impressive as any cathedral you are likely to encounter.  Everywhere we looked there was something interesting to see and everywhere he went, Vladimir was greeted by people he knows.  Eventually we made our way back along the riverbank towards Tvrđa and Vladimir pointed out the river beach complex dubbed Copacabana, where locals go to swim and enjoy 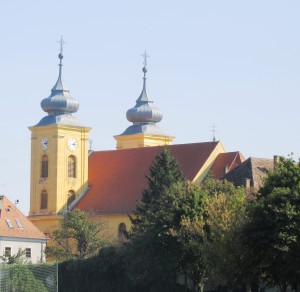 themselves, as well as the impressive modern pedestrian bridge and the zoo in the distance on the far bank of the river. Four hours later, we finally arrived back at Maksimilian, tired out and inspired in equal measure with our heads full of all the places we had seen and learned out.

That evening we enjoyed an exceptional meal of freshwater perch from the nearby Drava washed down with a very palatable local Graševina at the other main restaurant in Tvrđa, Slavonska Kuća.  By the time we took our leave on Wednesday morning, our plans for next summer had taken several leaps forward. It seems that Jasmina and Vladimir will make excellent hosts and are keen to help us bring our next project to successful fruition.  Vladimir is working on a programme of excursions for us and we are confident that Maksimilian will make a charming and practical base for our school.

Hopefully you like the sound of what we have to report so far and will decide to join us next June for another adventure into the heart and soul of Croatia.  Vidimo se!