With Wimbledon in full swing, it seems fitting to have a look at Croatia’s prowess in tennis and the remarkable achievement of Goran Ivanišević as being the one and only player EVER to win Wimbledon on a wild card entry. Now of course, he’s coaching number one seed Novak Djoković. 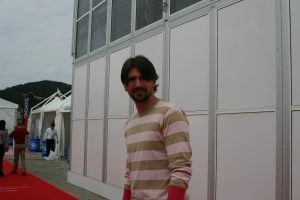 Here’s an article written by one of our students, Jane Cody, on the subject, when she visited the Firule tennis club in Split a few years ago. Thanks to Jane and also Firule Tennis Club for the photos.

When asked just how Croatia managed to produce so many world class tennis players from such a small population and lack of resources, the Croatian Tennis Federation’s Executive Director, Marina Mihelić came up with a simple answer – “we’re a talented nation in sports with balls.” Handball, football, basketball, water polo and, of course tennis, are just a few of the sports where Croatia punches well above its weight. According to the Split Tourist Board, commenting on the launch of a Sports Hall of Fame in early 2008, Split has the highest number of internationally successful sportsmen and women per capita in the world.

Goran Ivanišević is the most prominent Croatian tennis player of recent times and goes down in history for being the first (and so far last) player ever to win a Grand Slam title on a wild card entry. That was 2001 when his home club, in Split, were in the process of printing a book to celebrate their fiftieth birthday. They took it off the printing presses and watched in anticipation, and some disbelief, as their hero powered his way right though the tournament to win that memorable final and the Championship. Talk to any Croatian and they will remember Goran’s homecoming as if it was yesterday – his arrival in Bernie Ecclestone’s private jet, Formula 1, a huge flotilla of boats in Kaštela and Split bays, 150,000 fans waiting on Split’s waterfront Riva, parachutists, fireworks, parties and a striptease from the champion himself. Quiz night enthusiasts may also be interested to know that, according to the Daily Express, Goran Ivanišević is the only Wimbledon champion whose name is a strict alternation of vowels and consonants. 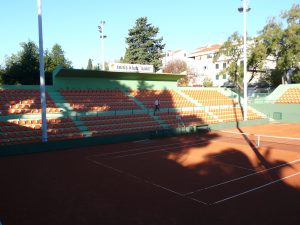 Split tennis club, in Firule, by the Zenta Marina complex, is where the young Goran swung his first racket. It’s the breeding ground and incubator for an abnormally high percentage of Croatia’s best tennis players. Nikola Pilić, born in 1939, was a pioneer in the national sport and one of the first to put Firule on the international tennis map, earning the epithet father of Croatian tennis in the process. He and Željko Franulović, also a product of Firule, set the bar that was subsequently raised by Ivanišević. Firule also nurtured Mario Ančić, sometimes known as “baby Goran”, Jelena Kostanić and a high proportion of the coaches that are now grooming the next generation of international Croatian tennis stars.

Ančić was dogged by illness, retiring in 2011, with  a press conference at the Firule club, and the current torch bearers for Croatia include Marin Čilić, unusually not a product of Firule but a Croat originating from Mostar in Bosnia, and Ivo Karlović. Karlović is towards the end of his Grand Slam career but Cilič has a few more years to go. Born in 1988, he started playing tennis at the age of seven, moved to Zagreb as a young teenager and won the Junior French Open in 2005. In early 2008 he was 57th in the ATP world rankings – not bad for a 20 year old.

Croatia takes its tennis infrastructure more seriously than it used to but is still under funded compared with many other nations with half the talent. The additional impetus, when Croatia won the Davis Cup in 2005, was relatively short lived, although much of the money earned as a result was invested back into the development of the infrastructure. The Croatian Tennis Federation has to fight its corner amongst many organisations vying for sponsorship from a limited number of large companies with the kind of marketing budget that could make a difference. Some funds are available from the National Olympic Committee and a small grant is provided by central government. Despite that, its Executive Director, Marina Mihelić suggests that part of Croatia’s secret, on top of a natural talent with balls, is that tennis courts are widely accessible to all kids, regardless of means, and the early emphasis is on having fun rather than being too competitive. The development of talent is monitored by the National Centre and steps have been taken to beef up the strength of the coaching network with a system of licencing being introduced. Mihelić believes that will help ensure that young talent is fully developed into a new generation of international winners by professionally qualified and trained home grown coaches. 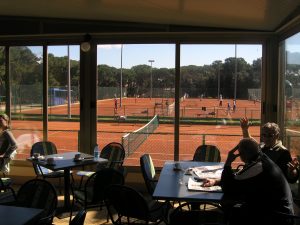 Courts at Biograd, near Zadar

If you’ve relinquished your ambitions to become a world champion tennis player but still enjoy the game then there are several opportunities to combine tennis with the other varied attractions of Croatia. Serious club and tournament players can take part in pre season tennis camps. In spring, many tennis clubs and teams of varying standards, come to Croatia to prepare for the new season. These tennis camps have been particularly popular with the Austrians and Germans for some years but are beginning to catch on with tourists from other countries.

Keen amateurs can choose one of the many hotels with good quality tennis courts attached to them. Some organise coaching and some will lay on a weekly or fortnightly tennis programmes.

Armchair Enthusiasts can visit the international tournaments. The Croatia Open, part of the ATP circuit, takes place in Umag in July every year and the Croatia Bol Open is normally in June.

Wherever you go in Croatia, you won’t be far from a tennis court. Nearly all are clay and generally well maintained, some are floodlit and most are open all year round. The Umag centre is one of the best facilities in the country, closely followed by Bol on Brač island. Most hotels of any size have at least one tennis court; if not there’s usually a good quality facility provided by the town – Dubrovnik has at least three.  However, if you want some of the Split magic to rub off on you, have a look at the next generation of champions at work in Firule.

Jane is going to Wimbledon next week and we’ve given her some useful phrases, to make an impression on Goran, in case she bumps into him again! You can see them on our Twitter feed, here.