Goran Moravček will be one of the expert local guides for the Croatian Language School 2021 Culture and Language Course to Kvarner and Gorski kotar, featuring Rijeka. A licensed tour guide, historian and prolific published writer, Goran recently attended a major religious festival, The Feast Of Our Lady of Trsat, and took time out of his busy schedule to tell us about the experience and the background to the festival. Not only is this a very insightful account of an important part of Croatia’s ancient and religious history, but, in a way, the event makes history of its own as it adapts to the new world of Corona virus. Many thanks to Goran for such a touching, first hand account of this year’s festival and its origins. 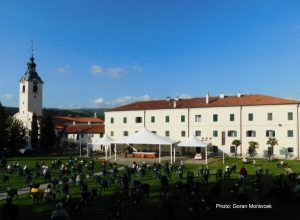 Every 10th of May in Rijeka we celebrate The Feast of Our Lady of Trsat who is, along with St. Vitus (June, 15), the celestial protector of the city. After the lockdown, this year the Feast was special. I will never forget the moments of sublime solemnity which I felt with other worshipers during the holy mass. Only a few hundred people gathered at the lawn in front of the Franciscan monastery to pray, many of them with masks. Franciscans and priests also wore the masks. 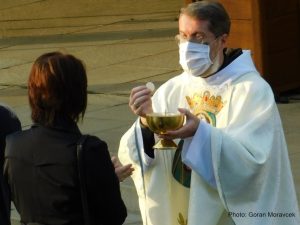 Only in difficult times, during wars and plagues, in seven centuries of history, is the Feast a simple ceremony. Usually, thousands of pilgrims and tourists come here every year, from all parts of Croatia, Slovenia, Italy, Austria, and other countries. Long centuries of tradition, and exceptional sacred and cultural heritage, classify Trsat among the most visited Marian sanctuaries in this part of Europe. 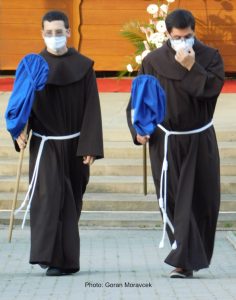 Trsat is a hill above the biggest Croatian seaport, Rijeka. An ancient castle was built here in the 13th century. Up to the 15th century, the castle used to belong to the Frankopans, a powerful Croatian family. The ruler of the territory, Count Nikola Frankopan, was one of the witnesses to the miracle which manifested itself near the castle. According to legend, on May 10, 1291, the Holy House of the Virgin Mary arrived from Nazareth on the wings of angels. In that very house, Archangel Gabriel had announced to Mary that she would conceive a baby with the Holy Spirit.

The Holy House was at Trsat hill until December 10, 1294, when again, on the wings of angels, it flew across the Adriatic sea to Loretto, near Ancona, in Italy, where it remains today. At the place where the Holy House had stood, Count Nikola Frankopan built the first church dedicated to the Mother of Grace. In the 15th century, Pope Nicholas V gave to the church the miraculous picture, well known in Croatia as Our Lady of Trsat, allegedly created by St Luke. From the 15th century until today, Franciscan monks guard the Sanctuary and the holy picture. Thousands of pilgrims arrive at Trsat and pray to the Mother of Grace. Among them, on 8 June 2003, was the St. Pope John Paul II. The monument dedicated to him is in front of the church engraved with his words: “Pray for me while I am alive and when I die!”. The Pope, who spent five days in Rijeka during his visit to Croatia in 2003, said those words in the Sanctuary, kneeling before the picture of the Mother of Grace. It was the most important moment in the long history of the Trsat Sanctuary.

To read more about Goran, his books and his areas of expertise, please go to  Rijeka 2020 And More!