Julia Molden continues her chronicles of our Croatian Language and Culture Course on Vis island with blog number three, in which our intrepid students go off-roading to discover wartime Vis and more. 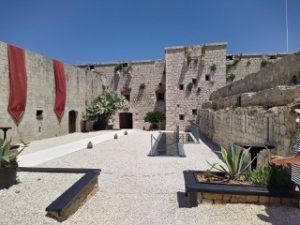 A Brief History of Time

Our first excursion of this year’s trip started with our being picked up at 08:30 in two Landrovers driven by two knowledgeable, young guides, who then set off on a whistle stop tour of many of the historical military sights of the island.  This involved a lot of off-road driving, taking us through the aromatic maquis of Vis, along tracks deep into the heart of the area. 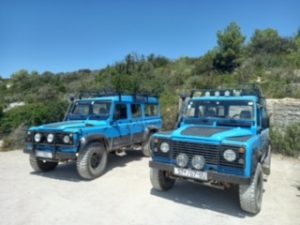 First stop was at former missile command, ARK Vela Glava, and a former nuclear bunker, where we ventured far underground and were shown everything from the hooks for old beds to a ladder leading up to an escape hatch.  Then we moved on to rocket base Stupišće where military vehicles were driven in to be rearmed with rockets and concealed from sight until they were required.  The next major stop was the large sea shelter, said to be for Tito’s submarines, although the water levels did not allow these vessels to enter and the corridor of water was made to conceal military warships. With a quick coffee stop in Komiža, we had a very busy morning, which finished with a visit to St George’s fortress, which was built by the English commander of Vis, George Duncan Robertson, in 1812 and was 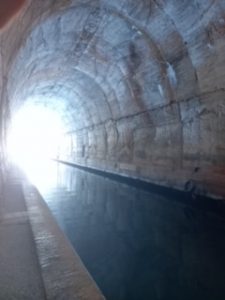 named after the British King George III.  It is now a restaurant.

At each stop our two guides talked knowledgeably and answered our questions and once the tour was over they took us to our venue for lunch, where we viewed one of the two cricket clubs in Croatia, as well as the World War II airstrip, before they took their leave and we moved on to a brief tour of the winery before settling down to a delicious meal accompanied by a variety of wines grown and produced on site.  And one of our number finished the proceedings by singing a couple of klapa songs with some of our Croatian group members joining in.  It is promised that from today we will all be provided with the lyrics so that we will be able to form a real klapa band when we visit Senko Karuza this afternoon.  Three hours later we finally fell out of the restaurant into a large minibus taxi which then proceeded to drive around the island dropping us all back at our respective homes.

All in all a most interesting and informative day full of new facts and experiences.  And to get further information on the historical elements of today, you can read the interview with Frank McGinley, which he gave to the CLS last month www.easycroatian.com/vis-military-history-frank-mcginley-interview/