Dahna Borojević is an international theatre producer from Croatia. After obtaining an MA in English language and comparative literature at the University of Zagreb, Dahna moved to London to develop her career internationally. She has been part of the acclaimed Daska Theatre, which originates from her home town of Sisak and whose last project she produced for the Edinburgh Fringe Festival. Dahna is also the producer of the play 48/52, a comic, poignant account of the personal impact of Brexit on a Remainer marooned in Middle England who soon finds himself starting to hate his neighbours! Luckily for us Dahna managed to find the time in her hectic schedule to answer a few questions for Croatian Language School readers. 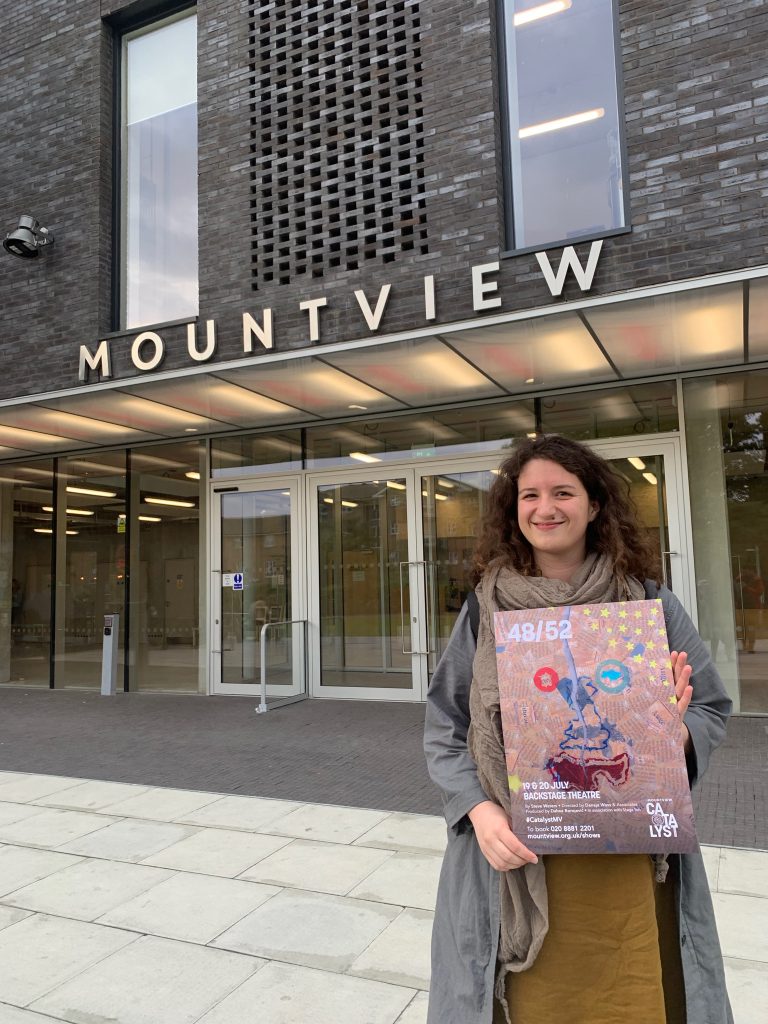 Dahna outside the Mountview Academy of Theatre Arts with a copy of the poster of her latest play 48/52.

1. Could you tell us a little about where you are from in Croatia and what it was like growing up there.

I grew up in Sisak, which is a small town just 50 km from the capital of Croatia, Zagreb. It was nice growing up there, because it is a small and quiet town, even though I spent the first five years of my life hiding in shelters because it was the time of war in Croatia. I moved to Zagreb when I started high-school and it is where I lived during my studies and before moving to London. 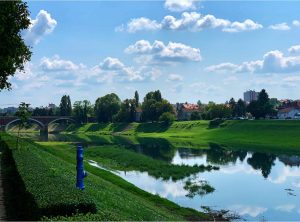 2. How did you become interested in the theatre industry?

I was born to a theatre family so it was a pretty straightforward way for me to develop. I made my first steps on stage and performed in a show when I was only four years old. I wanted to be an actress, but, when I grew up, the backstage side of the theatre appealed to me better.

3. What led you to move to London, how do you like living there and do you spend much time with other Croatians living in the UK?

I’ve always wanted to live in London. I was happy to have the opportunity to visit my family friends in London often so I grew quite familiar with the city. Finally, I decided to move and study in London, to  get to know how things are done here. It has been only a year that I have lived here, so it was quite intense and I didn’t have much time to spend with other Croatians, but this might change now when I am more settled.

4. Is the UK theatre world very different from Croatia and how? Is it welcoming to foreigners?

I’d say it is quite different, but in a good way. I am happy to be able to experience both aspects and take the best out of it. As far as I noticed, the UK theatre carries a strong production value while in Croatia the emphasis lies in the artistic value of the performance.

5. What are you working on at the moment?

At the moment I am working on several projects. I am still working on the performance 48/52 which I produced for the Catalyst Festival this July and working on projects as part of our company Stage Inn. Stage Inn was founded in 2019 in London as a platform for international creatives to showcase and perform their pieces of art in the UK and Ireland. Special emphasis will be put to reaching immigrant audiences who are longing for their native culture and well known artists which they’ve left back home. Another big goal of this company is to bring some of the greatest theatre from Europe and broaden horizons to show that art and culture does not have boundaries or borders to be crossed. 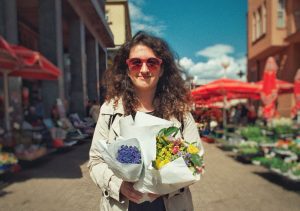 6. What’s your proudest achievement so far?

I am proud of where I am right now and the way things are developing for me in London.

7. Where do you see yourself in five years time?

I hope I will have a successful career in the theatre industry in five years time and that it will provide me the luxury to live in London, but to spend some time travelling or stay in some more peaceful surroundings at the seaside in Croatia.

8. How can we find out more about you and your projects?

We are preparing some projects for November. One of Daska Theatre’s children’s show is coming to London and the show which I produced, 48/52 will be performed again in November. All dates and events will be published on our Facebook page Stage Inn. Stage Inn